With top-seed Kansas just 207 miles away and a set of teams with significant and engaged fan bases, the Omaha Regional of the NCAA men’s basketball tournament is by far the hottest seller on the market, according to data provided by Ticket Club. Games in Boston are the second-hottest on the weekend, followed by Los Angeles and finally Atlanta. Sweet 16 contests tip off in Atlanta and LA on Thursday, with Boston and Omaha playing Friday-Sunday, with the regional winners headed to San Antonio for the Final Four the following Saturday.

Tickets for each session of the contests played Friday and Sunday at the CenturyLink Center are markedly more pricey than their counterparts in Boston, Atlanta, or Los Angeles. An all-sessions pass had a minimum asking price of $460 and an average of $992 for Ticket Club members as of Wednesday. Those numbers put the regional $62 higher per ticket at the low range than the next-closest region (LA), and a whopping $307 higher on average than Boston’s second-highest average at $543.

Given the proximity of Kansas and its rabid fan base, sales for the Omaha regional are no surprise. Wichita, which hosted the Jayhawks first and second round games, were the second-highest first round tickets in the market, trailing only the far smaller venue in Idaho on average prices. Add to that the fan bases of historically successful basketball programs like Duke and Syracuse (and, to a lesser extent, Clemson), you get a recipe for strong sales. It also is worth noting that Omaha’s CenturyLink Center has the lowest stated capacity of any regional facility, 300 less than Boston’s TD Garden, and about 730 less than either Atlanta’s Philips Arena or LA’s Staples Center.

On the high end of the scale, Los Angeles actually takes the cake – with one notable exception. According to Ticket Club, the priciest tickets available for an all-session pass are in Omaha at $2,868, while LA takes the cake with Thursday session tickets topping out with a $5,725 per ticket set near courtside, and a $9,252 per ticket group for Saturday’s regional final. Sunday’s regional final in Boston takes the cake for the priciest ask, by far, on the weekend, with one group of suite tickets with an eye-watering asking price of $113,000 per seat. The next-highest price in Boston, it should be noted, was far less. 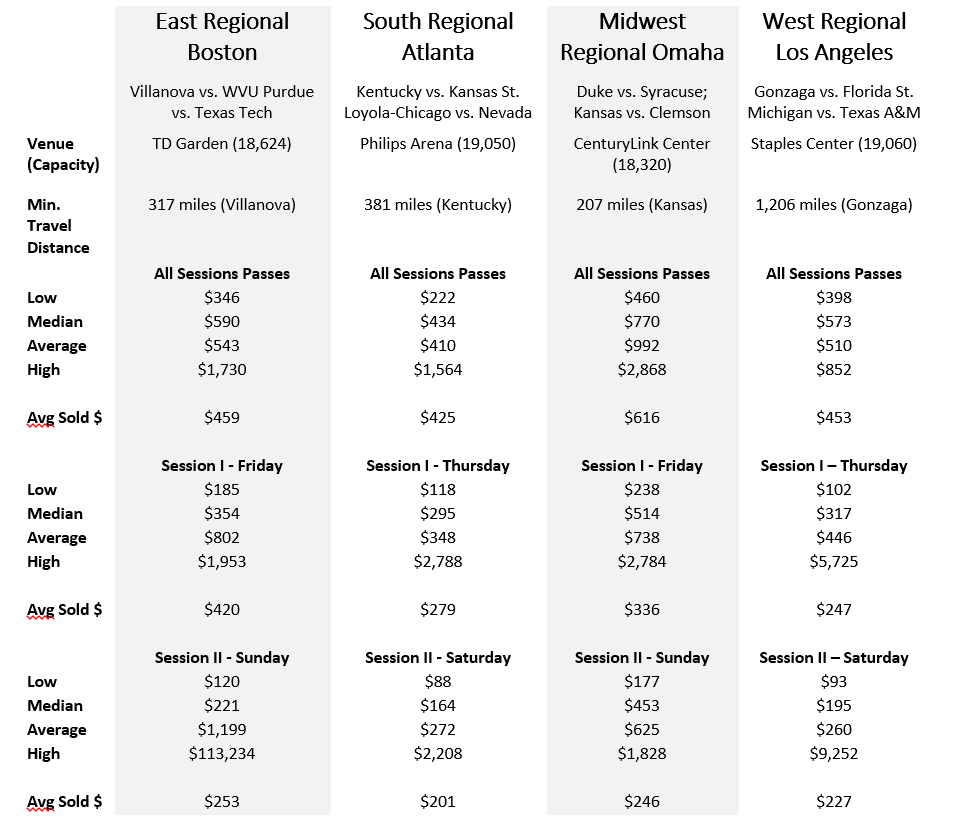