Rise Against Announces ‘Mourning in Amerika’ Tour With AFI, Anti-Flag

Get ready for some moshing and head-banging this summer on Rise Against’s politically charged ‘Mourning in Amerika’ tour with rockers AFI and Anti-Flag.

The Mourning in Amerika tour will kick-off on July 27 in Montreal, Quebec at the festival ’77 Montreal, and continue throughout the summer, stopping in cities like New York City, Philadelphia, Austin, and Seattle. They will also make a special appearance at Wrigley Field with Fall Out Boy in their hometown of Chicago, Illinois on September 8. The tour will wrap-up in Irvine, California on September 30.

Currently, Rise Against is still on tour, supporting their top-charting 2017 record, Wolves. This spring, the band will hit many music festivals, including The Woody Show’s 420 Fiesta in Los Angeles, Las Vegas’s Punk Rock Bowling and Music Festival, France’s Hellfest and the Graspop Metal Meeting in Belgium.

Wolves is Rise Against’s eighth studio album, and encompasses everything the band feels passionate about. Lead vocalist and guitarist Tim McIlrath explained to the Orange County Register how the release of the record was delayed based on the election and overall political shift in the country, claiming that they “realized that now the fights we thought we had already fought before, we’re fighting them again.”

“I realized that there’d always been a reason for Rise Against to exist and now this is an even more definitive reason,” McIlrath said. “We needed to try to distill what was happening and be there for our fans who are confused as to what … is going on and try to make something relevant and real out of all of the low hanging fruit of the Trump administration.”

AFI will be touring in support of their 2017 self-titled album, along with Anti-Flag, who released an album last year titled American Fall.

Tickets go on sale tomorrow, March 30 at 10 a.m., while select dates will be available to the general public on April 6 at 10 a.m. Check out the full list of tour dates below. 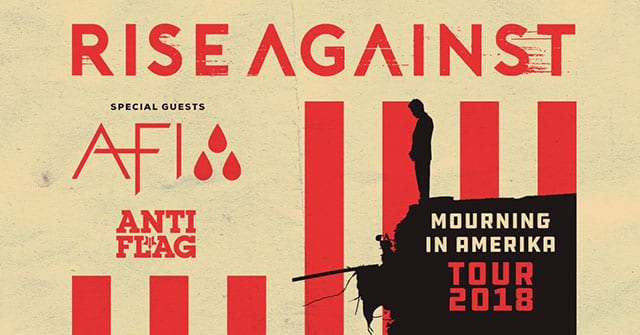 Rise Against with AFI and Anti-Flag: Mourning in Amerika Tour