The annual Lollapalooza music festival, set to take place this August in Chicago, Illinois, announced the 2018 lineup this afternoon, offering an eclectic group of musicians.

Arctic Monkeys, The Weeknd, Bruno Mars and Vampire Weekend are among the top headlining artists set to play at this year’s show. Other well-acclaimed musical performer’s on the ticket include indie groups like Walk The Moon, St. Vincent and Chvrches, as well as punk-rock bands All Time Low, Catfish and the Bottlemen, and The Vaccines.

Like always, Lollapalooza offers a wide array of genres, combining punk, rock, and metal with hip-hop, pop, and electronic music. Notable rap artists to see this year are Tyler, The Creator, Lil Pump, Lil Uzi Vert, and Logic. Additionally, the festival hosts new, up and coming artists, helping them get their “big break.” Rainbow Kitten Surprise, Hippie Sabotage, The Wrecks, and Mainland are among the many rising groups to check out this year.

Check out the full line-up below: 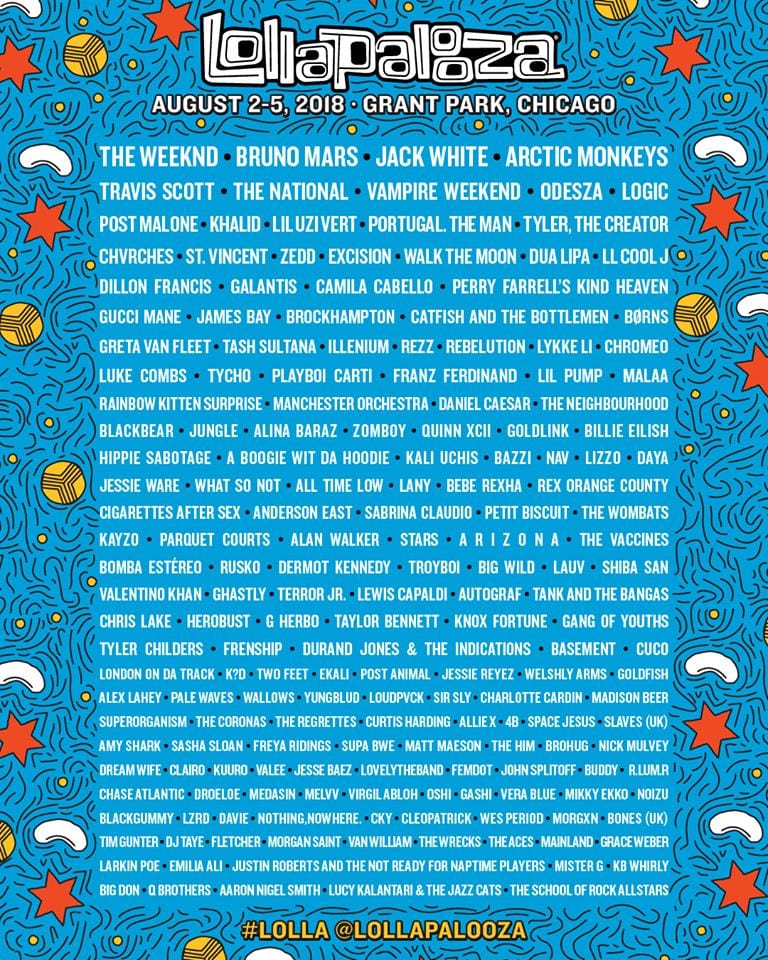 The festival will run from Thursday, August 2 through Sunday, August 5 in Chicago’s Grant Park. Over 170 artists will perform throughout the four days, along with shows from dance and comedy acts and offerings from craft booths.

Tickets for a four-day general admission pass at Lollapalooza went on sale already, including layaway plans. The single-day tickets are yet to go on sale, however, now that the artists have been announced, they’re sure to go quick. Already, the four-day ticket passes dominated the Top 20 Best-Selling Events for Ticket Club yesterday, according to sales data.

Since it’s first show in 1991, Lollapalooza has been a staple in the music industry. The festival is now global, and has already stopped in Argentina and Chile. Alongside the United States, Lollapalooza will visit Germany, Brazil, and France.

Visit Ticket Club to find tickets to this year’s festival, taking place around the world.