Loudwire is presenting the wildest rock show of the summer, featuring Buckcherry, P.O.D., Lit, and Alien Ant Farm for the Gen-X Tour.

The tour is set to kick-off on June 28 at Milwaukee, Wisconsin’s Summerfest, and run across the country through early September. The trek will hit cities like Savannah, Baltimore, Trenton, and St. Louis, ending in Scottsdale, Arizona on September 7. A few of the performances are free-entry, including Michigan’s Stars and Stripes Festival, the August 6 show in South Dakota at Iron Horse Saloon, Oklahoma’s Choctaw Casino & Resort show on August 9, and the August 25 show in El Paso, Texas at Speaking Rock Entertainment.

Los-Angeles based rock natives Buckcherry released a deluxe version of their 2015 record Rock ‘N’ Roll in 2016. The group is best-known for their third studio album, 15, which features the hit single “Crazy B*tch,” along with “Sorry” and “Everything.”

“You’re gonna get your money’s worth on this one, the Gen X Summer tour is gonna be one to remember for sure,” Buckcherry frontman Josh Todd told Loudwire. “I love these bands. We all came out around the same time exploding onto the scene with great summertime hits and an awesome live show…let’s get wild and loose!”

All four bands are from California and Alien Ant Farm guitarist describes the group as “old buddies from the office.” Kevin Baldes, bassist of Lit, added that the group has been longtime friends and colleagues for over 20 years, claiming the tour will be a “real hoot.”

“This is the good vibes, rock and roll tour of the summer,” Sonny Sandoval from P.O.D. said. “A bunch of friends hitting the road together and playing music we love for more friends across the states.”

On the tour’s official website, Generation X is described as a group of fans that have “continued to support and eagerly anticipate the raw, unfiltered experience of their rock Gods.” These bands were specifically picked to remind fans that although new music continues to emerge, rock will never truly die. Josh Bernstein of Loudwire says that he’s “excited for this to destroy a town near you.”

Generation X Tour tickets are on sale now. Check out the full list of tour dates below. 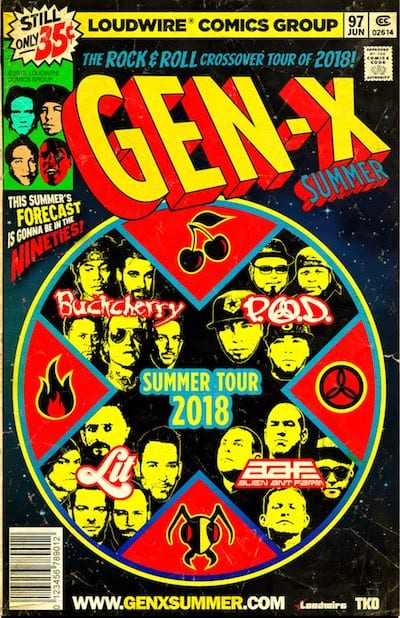