Live Nation a Monopoly? “Very Smart Assessment” Per CEO (in 2015)

In the wake of Sunday’s bombshell piece on A1 of the New York Times outlining potentially anti-competitive practices in place by industry giant Live Nation Entertainment and subsidiary Ticketmaster – and the potential that they are being examined by the Department of Justice – a response was inevitable.

It came a day later in the form of a blog post authored (or at least credited to) Jared Smith. The Ticketmaster President runs through the company’s rebuttal to the Times’ reporting, particularly claims that company practices violate a consent decree it agreed to as part of the Department of Justice giving a green light to the merger between the giant companies back in 2010.

Michael Rapino, the President and CEO of Live Nation, shared Smith’s rebuttal on Twitter, simply adding “Well Said” to the headline in his share. 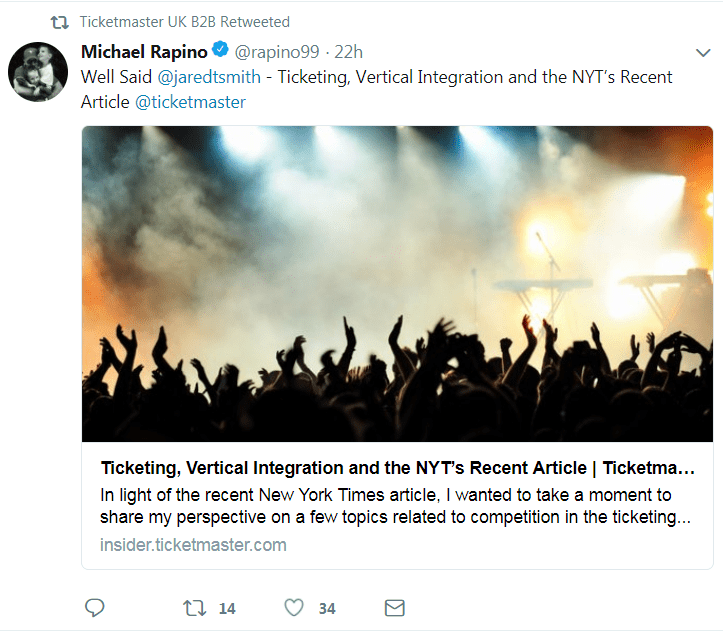 The brevity reminded us of another piece of communication by Mr. Rapino which we came across not too long ago.

Among the reams of evidence brought by Songkick in its lawsuit alleging unfair and anticompetitive practices by Ticketmaster and Live Nation – which, you may recall, was ended when the giant simply cracked open its checkbook and purchased the company suing it to settle the litigation – was an email from the Live Nation CEO back in 2015.

In that email, Mr. Rapino shared a link with four individuals, with the headline of the link serving as the subject line, and his three word statement on the content at hand. The headline/subject line? “Live Nation Entertainment: An Unregulated Monopoly?” 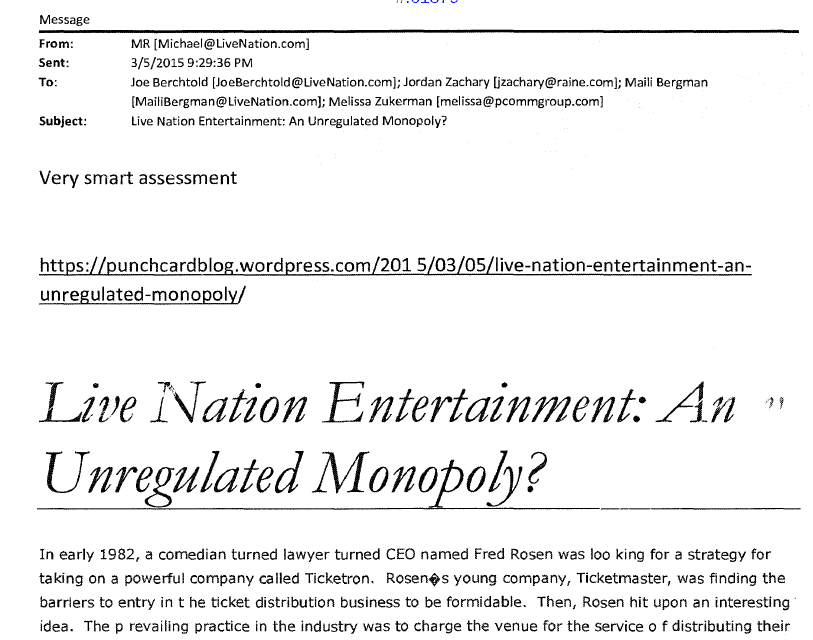 Also of note are the four individuals Mr. Rapino sent the email to.

Joe Berchtold is the President of Live Nation. Maili Bergman is the senior vice president of investor relations for Live Nation Entertainment. Jordan Zachary was at the time the managing director of Raine Group, but brought on at Live Nation as Chief Strategy Officer two months after the email was sent. Melissa Zukerman is a managing partner at Principal Communications Group, a public relations firm which counts Live Nation among its clients.

The story was originally published at punchcardblog.wordpress.com. It now resides at punchcardresearch.com. For those curious, also downloaded is the original email from Mr. Rapino that existed in the evidence files related to the lawsuit, with the version he sent to his leadership. It can be read here: (PDF opens in a new window)

We attempted to contact Punchcard Research to request comment on Mr. Rapino’s assessment of their analysis, but did not receive a response.

Published originally in 2015, five years into the Live Nation-Ticketmaster coexistence, the piece goes into rather exhaustive detail regarding the live entertainment business, and how the way the company operates at the scale which it does makes it very difficult for any competition to enter the fray. It examines the company from the perspective of someone interested in investing with the publically-traded company (which the author, who is not identified, admits to having done) – but its findings are obviously gerund to the conversation we’re having this week.

“[Live Nation’s multi-layered existence in the live entertainment space] is similar to the flywheel concept from high school physics, typically demonstrated by a heavy disc that is difficult to start up, but that spins easily with limited effort once it reaches full speed,” one section reads. “Over time, once critical mass is reached, a simple innovative idea becomes a well-oiled machine, which translates into a predictable and profitable business. A flywheel is also a self-reinforcing loop made up of a few key initiatives. Those initiatives feed and are in turn driven by each other, and build a long-term business…

“Once [a] platform company reaches critical mass of participants on each side, the flywheel begins to spin faster and faster,” it continues later. “There is ample reason to believe that Live Nation has reached or is on the verge of reaching critical mass.”

The analysis goes into several instances of how the various pieces of Live Nation’s operation fit the model, and effectively reinforce one another, as well discussing an example of how well the company has avoided anti-trust regulation thus far – unlike the movie business, where regulations forced studios to divest the theaters they once owned as a measure against unfair market practices.

In his conclusion, the author, who is not identified as far as we can tell, highlights the fact that even if his (or her) forecasts for strong growth beyond even optimistic industry opinion at the time, there was lots of protection from any serious downside to investing. “First and foremost, Ticketmaster has a near monopoly on ticket distribution, how much is this worth? Second, Live Nation owns or controls most of the important music venues in the U.S., venues that it makes no economic sense to duplicate. How much is this worth?”

The only real threat, per the author, are downturns in discretionary spending or live music going out of fashion, or regulatory or litigation threat. Otherwise, they conclude, Live Nation’s vertical integration had already vaulted the operation into a “winner take all” position in the marketplace.

We’re obviously not a litigator nor an analyst of business math and finance. Nor are we particularly well versed in the nuance of what makes something a monopoly vs. a well-managed business at scale. And we must at minimum take with a grain of salt the nature of Mr. Rapino’s comment and what specific piece of the article he may have been referring to, if not the entirety of it.

But the fact that Live Nation’s own chief executive called the assessment “very smart” at the time of publication and shared it with his senior leadership, make this a compelling read, to say the least. Apparently we may have an idea about whether or not the Department of Justice would agree at some point in the future.