The United States Department of Justice is looking into the operating practices of Ticketmaster and parent Live Nation related to its behavior in the marketplace since the live entertainment giants merged in 2010, according to a New York Times report published on Sunday.

Reported by Ben Sisario and Graham Bowley, the piece is a deep dive on the ticketing and live entertainment space and the vertical integration behemoth at the core of it, which has a function in practically every sector of the business and the ability to dictate almost all terms across the board. Of central importance to the piece is the assertion by many in the industry that Live Nation Entertainment has not honored the terms of a consent decree negotiated as a part of that merger intended to keep the company from choking out competition.

Instead, however, “eight years after the merger, the ticketing business is still dominated by Live Nation and its operations extend into nearly every aspect of the concert world,” it reads. “Ticket prices are at record highs. Service fees are far from reduced. And Ticketmaster, part of the Live Nation empire, still tickets 80 of the top 100 arenas in the country. No other company has more than a handful. No competitor has risen to challenge its pre-eminence.” 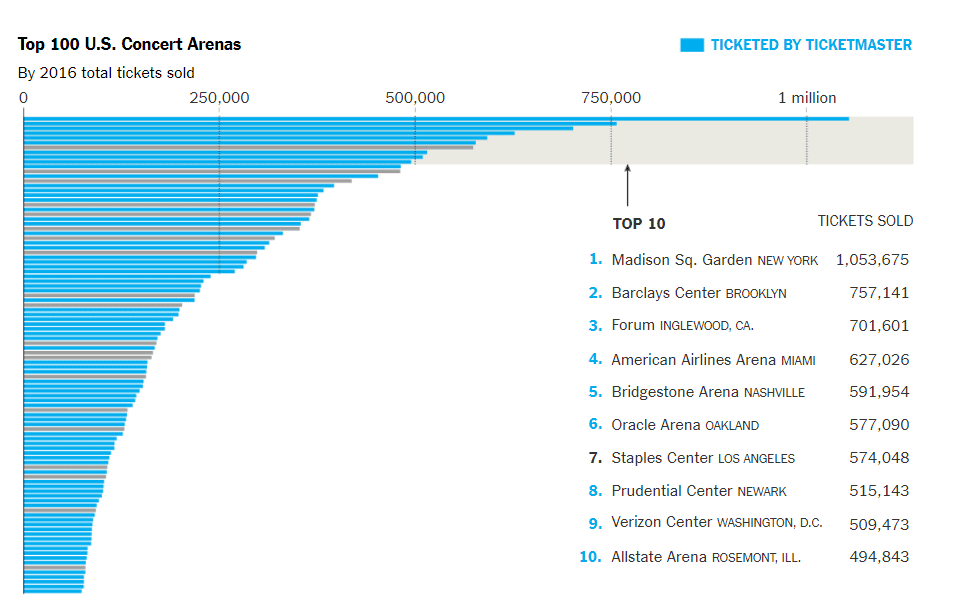 Allegations of anti-competitive practices run a common theme throughout the report. AEG told The Times that it has been threatened with the loss of shows at venues it manages in several markets should it turn away from using Ticketmaster as its vendor for ticketing, which Ticketmaster dismissed as “tactical, deliberate mischaracterizations” by a competitor. Regulators are also investigating possible antitrust violations via Live Nation threats related to venues outside of AEG’s management as well.

One of the main issues is that no regulatory body has the kind of manpower or resources it would take to manage the task of reigning in a company like Live Nation should it act inappropriately in its market.

“The Consent Decree was supposed to prevent Live Nation from using its strength in live entertainment to foreclose competition in ticketing,” says Beau Buffier, the chief of New York Attorney General Eric Schneiderman’s Antitrust Bureau. “But it is now widely seen as the poster child for the problems that arise when enforcers adopt these temporary fixes to limit the anticompetitive effects of deeply problematic vertical mergers.”

It’s a wide-ranging look at the various practices and concerns within the ecosystem, and doesn’t even go into the allegations that Ticketmaster used illegal insider information to run Songkick/Crowdsurge into the ground – allegations that never saw their day in court when Live Nation simply bought the company and its assets to kill the lawsuit before its scheduled trial this spring. It also doesn’t cover (outside of a brief mention) Ticketmaster’s operation in both the primary and secondary ticketing market, where allegations of improper practices abound as well.

Read more at NYTimes.com – it’s worth your time.