Common2 Memorial Concert4 The Roots12 Usher4
Big name artists like Usher, Common, and The Roots have been announced as performers at a concert for the opening of a memorial to...

Big name artists like Usher, Common, and The Roots have been announced as performers at a concert for the opening of a memorial to victims of lynching in Montgomery, Alabama.

Montgomery is holding an opening celebration for the first memorial to pay tribute to the horrible racial deaths by lynching – the National Memorial for Peace and Justice. The memorial will overlook downtown Montgomery on a hill and feature 800 six-foot monuments that identify the lynching victims across the country, according to WSFA. It will pay tribute to the more than 4,000 African-American deaths by white lynch mobs between 1887 and 1950.

The concert will celebrate the opening of the National Memorial for Peace and Justice at Riverwalk Amphitheater on April 27.

According to the Equal Justice Initiative, the gathering will feature performances from Usher, Common, The Roots, Kirk Franklin, Gary Clark Jr., Brittany Howard, and more yet to be announced. EJI organized the two-day summit on April 26 and 27, which will be centered around the opening of the memorial. A grand opening ceremony will be held at the Montgomery Convention Center with musical performances and speakers, including appearances from Congressman John Lewis, former Vice President Al Gore, and activist/journalist Gloria Steinem.

Usher shared in a tweet that he is “so proud” to lend his voice in support of the opening of the memorial.

“There is still so much to be done in this country to recover from our history of racial inequality,” EJI Executive Director Bryan Stevenson said, according to WSFA. “I’m hopeful that sites like the ones we are building and conversations like the ones we’re organizing will empower and inspire people to have the courage to create a more just and healthy future.”

Stevenson hopes that the memorial will bring together different communities to learn about the history of racial injustice. Just a few blocks from the memorial is the accompanying Legacy Museum, which acknowledges slavery and the racial injustices throughout our country’s history.

Doors to the National Memorial for Peace and Justice concert at Riverwalk Amphitheater will be open at 6 p.m. and the show will begin at 7 p.m. Tickets are on sale now. 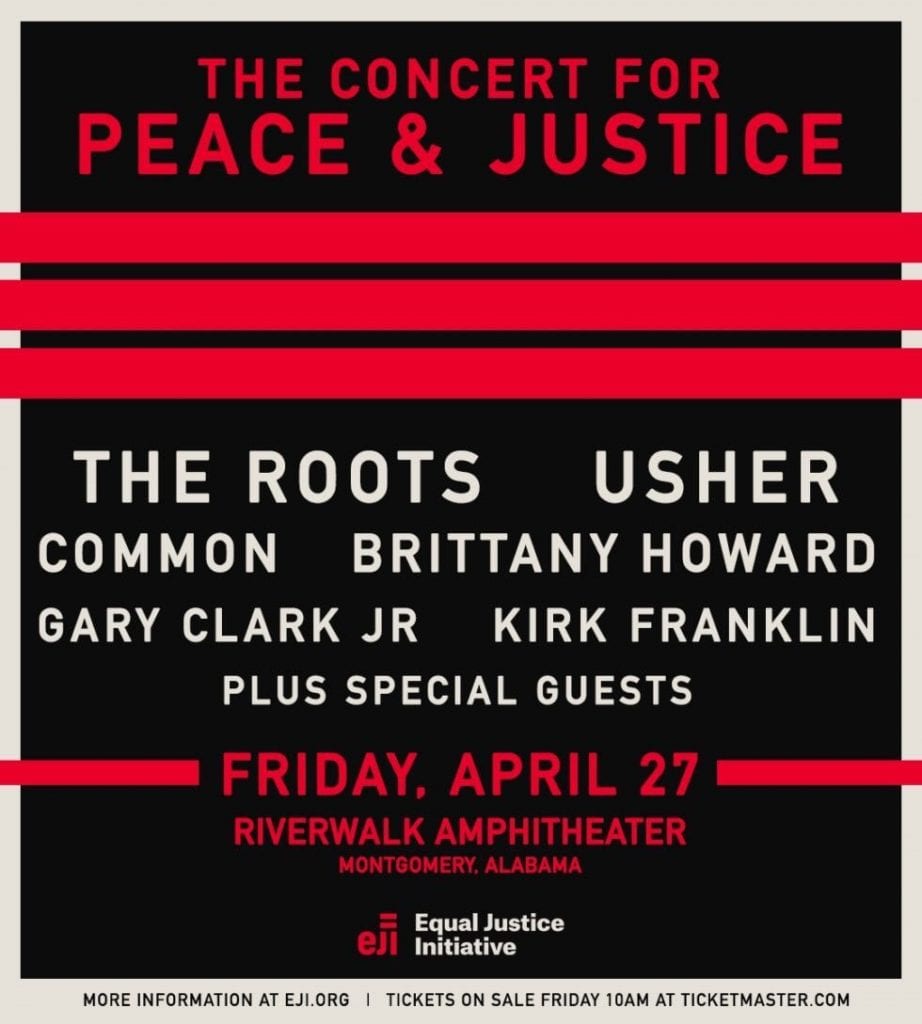