Industrial band Nine Inch Nails are back after four years with a new record on the horizon and a packed, 26-date North American tour this fall. However, there’s a catch – in order to get tickets, fans must purchase them in-person.

In an attempt to curb scalpers, NIN will only offer tickets at each venue’s box office starting on May 19, where tickets will be first-come, first-serve. Frontman Trent Reznor explained the reasoning for this new system and no online interaction:

“The promise of a world made better by computers and online connectivity has failed us in many, many ways, particularly when it comes to ticketing. Everything about the process sucks and everyone loses except the reseller. We’ve decided to try something different that will also likely suck, but in a different way. We’re hoping many of you will be happy with the results, while some may do what they always do and bitch about it.”

On their website, Reznor explains that fans will have to go to the box office and interact with another human being, and the experience has potential, but is not guaranteed to be “enjoyable.”

“You may actually encounter other human beings with similar interests likely wearing black clothing during the process and potentially interact with them,” he states, claiming that NIN has always “been about bringing people together.” If fans are unable to make it to the “Physical World Presale,” a limited number of tickets will be available on all normal ticketing channels, including online, however, the dates those will be released have not been announced yet. For more ticketing information, visit the NIN site.

The “Cold and Black and Infinite” tour will kick-off in Atlanta, Georgia on September 13, and the band will hold two shows in almost every city they hit. They’ll make stops at New York City’s Radio Music Hall, Detroit’s Fox Theater, and close out the trek with four shows at Los Angeles’ Palladium. NIN will be joined by alt-rockers of The Jesus and Mary Chain.

NIN’s new record, Bad Witch, is the third and final installment of the trilogy series; starting in December 2016, NIN released Not the Actual Events, followed by Add Violence in July 2017. Bad Witch only has six tracks, but is highly-anticipated. It is due June 22.

Prior to the tour, NIN will perform at The Joint in Las Vegas this June before hitting a slew of festivals throughout Europe and Asia. These include London’s Meltdown Festival, Rock Werchter in Belgium, Japan’s Summer Sonic Festival, and the Aerodrome Festival in the Czech Republic. Check out the full list of NIN dates below, including shows on the Cold and Black and Infinite tour this fall. 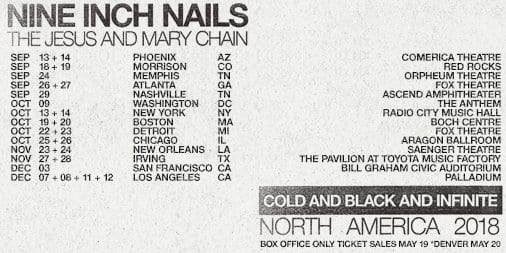