Hundreds of fans were treated poorly at the chaotic Billy Joel concert last week in Manchester’s Old Trafford, including disabled concertgoers who struggled to see the stage and were unable to move.

Joel’s only show in the UK this year was in Manchester, so fans traveled across the country just to see the icon. However, many fans found out that their seats had no view of the stage, leaving them staring at walls. The seats were not angled correctly, so some of them couldn’t even see the big screens. Although many of the concertgoers were relocated, some did not have the ability to do so.

The Manchester Evening News spoke with Geoff Hayes, who was attending the show with his wife, son, daughter-in-law, daughter, and grandson – who suffers from Spondyloepiphyseal dysplasia (SED). Since the family needed wheelchair access for Hayes’s grandson, they were unable to move to seats with a better view.

“People in our block were going down to talk to the stewards about their seats,” Hayes said. “This was a hazard in its own, because the aisles and gangways were all blocked. Stewards started sending people down on to the pitch, but then stewards on the pitch were sending them back again. It was pandemonium.

“We couldn’t be moved because my wife and my grandson couldn’t manage the stairs.”

He said his daughter emailed Ticketmaster to try and get a refund but were told it could take up to 28 days to hear anything. Hayes spent £750 to attend the show with his family, yet he couldn’t even watch Joel perform.

Hayes isn’t alone, though. Many fans began bashing the venue and Ticketmaster online, asking for refunds.

Jason Yates described the show as “utter shambles” and said that although he paid £70 for his seat, it was “terrible” and “should never have been sold.” He shared the following picture, showing his restricted view of the stage. 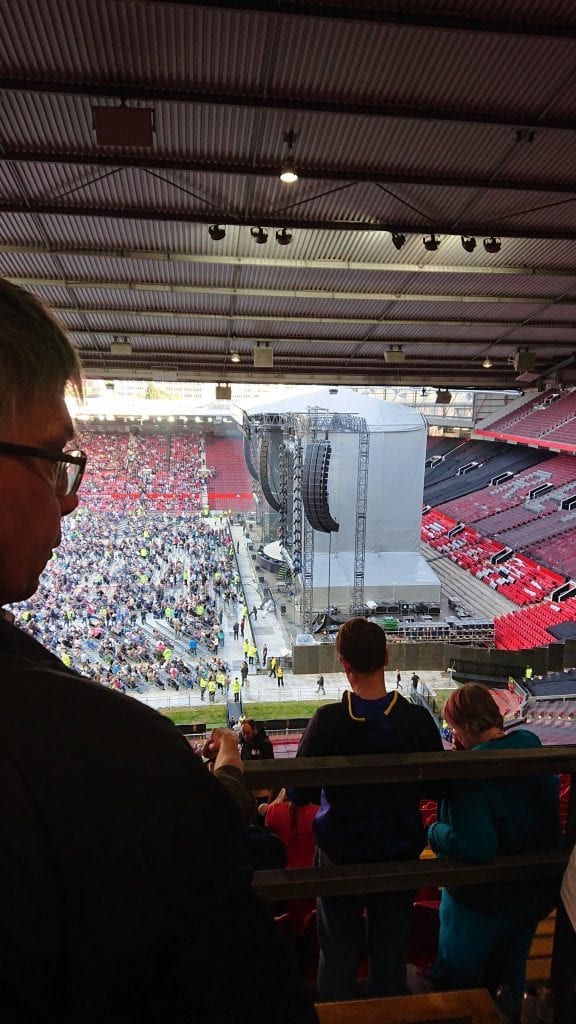 Yate’s Twitter complaint sparked a string of responses from other angered fans.

The spokesperson for the promoter SJM said that there were issues while the stage was being built and had to be brought forward more than the original planned position, affecting fans’ views.

“SJM Concerts tried to relocate as many customers as possible but acknowledge some people could only enjoy the music without a view of the full band,” they said in a statement. “For those people who were affected and not relocated please contact your ticket agent.”

“We are working closely with the promoter SJM and are pleased to say that some refunds are already being processed,” a Ticketmaster spokesman said. “Our customer service team based in Manchester have been working hard to ensure that all affected customers are provided for, and this will be completed within the next seven working days.”

Joel, who is best-known for hits “Uptown Girl” and “Piano Man,” will play in Dublin, Ireland on June 23 before heading to Germany and then the United States.

Visit Ticket Club to find tickets to a Billy Joel show this year.