R&B/pop star Bruno Mars has jumped on the Yondr bandwagon, trying out the no-phone policy at his show in Las Vegas over the weekend.

Jack White completely changed the game of the music industry when he announced earlier this year that his tour would strictly enforce a no-phone policy. Fans were forced to use Yondr, a service that locks concertgoers’ phones in a pouch during the set. While White is the first artist to use Yondr on a full tour, other artists have dabbled with the policy, including Dave Chappelle, Chris Rock, Kevin Hart, and now, Mars.

During his residency performance at Vegas’ Park Theater, Mars addressed the audience, saying that he wanted the crowd to enjoy the experience and not be focused on their phones. While MGM Resorts did provide a warning of the policy, it was hidden in the fine print. The Las Vegas Review-Journal points out that on the Park MGM/Ticketmaster link for Mars’ shows, it states: “No Refunds or Exchanges. No smoking, this includes vaping and e-cigarettes, no audio recorders/cellphones/smart watches/cameras/recording devices, and no outside food.”

While some fans weren’t fond of the no-phone idea, others actually described it as a freeing experience. 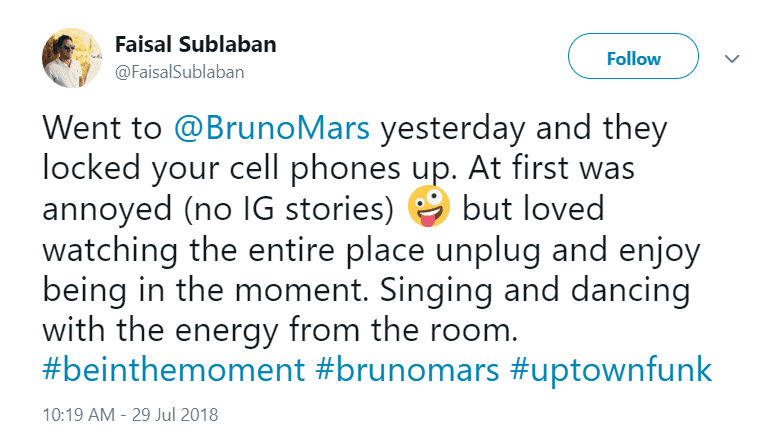 It is unclear whether Mars will follow this policy throughout his 24K Magic Tour, or if it was just in Vegas. ABC 12 Action News said that the Yondr pouches are already in use at the Clark County School District to prevent students from being distracted in their classrooms.

Mars’ 24K Magic Tour Finale is set to kick-off this September in Denver, Colorado. Last week, Cardi B, who was slated to open the show, has cancelled all appearances after having a baby. At this time, a new opening act has not been confirmed.

Check out Mars’ upcoming tour dates below and visit Ticket Club to see him in concert this year.