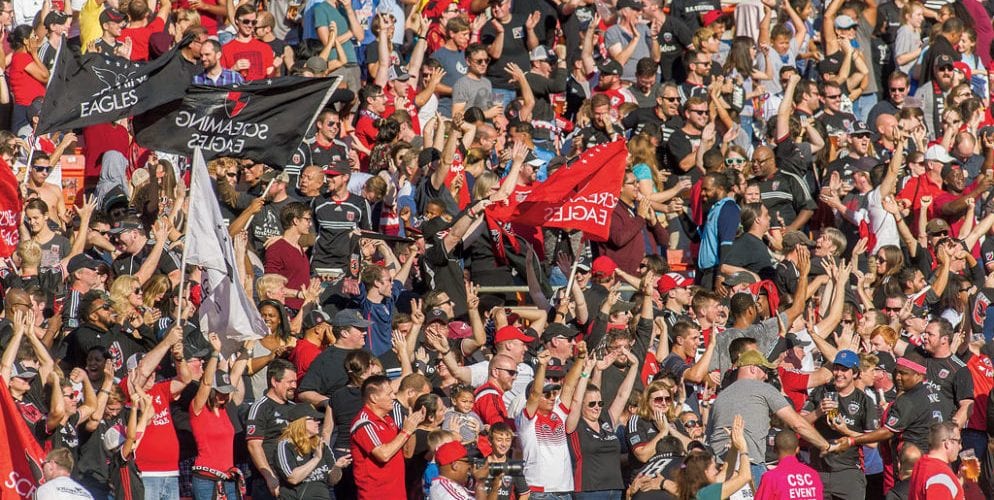 D.C. United announced that they would allow all three of its supporter groups to have access to ticket-buying opportunities for the rest of the season, following a protest at a game earlier this month.

In February, following their move to the new Audi Field from RFK Stadium, D.C. United entered into an exclusive ticketing partnership with the fan group Screaming Eagles. This group was given opportunities to purchase tickets to home games in bulk and resell the tickets to its members, allowing the profits made to fund group activities. According to a club press release, D.C.’s goal was to let the Eagles “take the lead role to manage all aspects of the supporter culture.” However, the two other groups – La Barra Brava and District Ultras – were not given the same opportunity, although they were when they team played at RFK Stadium.

During the match between D.C. United and the Vancouver Whitecaps at Audi Field on July 14, La Barra Brava and District Ulta protested. It seemed to work, as the groups gained attention from the team. It was noticeably more subdued at the stadium, and the absense of the two groups was present.

“We missed La Barra Brava and District Ultras at the first match,” D.C. United Chief Revenue Officer Mike Schoenbrun said. “It was definitely a vacancy not having them there.”

One week after the protest, D.C. United announced that all three of its groups would be represented equally at games. While final details are still being sorted out, it has been stated in a press release that the three groups will represent the team at the match tomorrow between D.C. and the New York Red Bulls, as well as for the remainder of the 2018 season.

“D.C. United are one big and growing family,” United Managing General Partner and CEO Jason Levien said. “The Screaming Eagles, La Barra Brava and the District Ultras have encompassed the ‘all welcome, all united’ spirit since their inceptions. Having their leadership at Audi Field is a tremendous boost. It remains D.C. United’s priority to include every member and group in our incredibly diverse fanbase. This is another important step for the club as we enter a new and exciting chapter at Audi Field.”

Although the groups can now purchase tickets, La Barra Brava said that there are remaining inventory issues for the rest of the season. Jay Igiel said that the group doesn’t necessarily have access to as many tickets as they would like; only 75 season tickets remain, and the next two home games are sold-out. Similarly, Carrick Baugh of the District Ultras said that the group will create access for its members to attend the next few games, but they’re not prepared to deliver what “the group is known for delivering.”

While there are still a few logistics that need to be sorted out – including stadium acoustics and safety among fans in the new seating grade – it seems that all three teams are happy to be united and bring a sense of excitement back to the stadium.

“We are thrilled that La Barra Brava and the District Ultras will be taking their rightful place in the supporters’ north stands at Audi Field,” Screaming Eagles President James Lambert said in the release. “Together we will build the strongest home support in MLS.”