Linkin Park’s Mike Shinoda has been announced as the headliner of this fall’s Monster Energy Outbreak Tour, which will mark his first full headlining trek across North America.

Shinoda released an solo album this year, Post Traumatic, following the death of his friend and bandmate Chester Bennington, who took his life last July. The album, which features 16 tracks, includes raw and emotional songs like “Place to Start,” “Crossing a Line,” and “Over Again.” Shinoda described the album, which is the first record released under his own name, as a “journey out of grief and darkness, not into grief and darkness.”

In support of the record, Shinoda announced dates throughout China, Europe, and the UK this August, and earlier this year, he performed at LoveLoud Festival. However, the Monster Energy Outbreak Tour will be his first full-length solo run. The trek is slated to begin on October 10 in Montreal, Canada and will hit major cities like New York, Tampa, Dallas, Atlanta, and Chicago. Silver Spring, Maryland will close out the tour on November 17.

Additionally, at each show, Shinoda will present art pieces that he created while making Post Traumatic.

“Listening to a recorded song is not the same as experiencing that song live on stage,” Shinoda said in a press release. “Similarly, seeing a painting in an album or book is not the same as seeing the original, in person. In sharing a live experience with you, my hope is to inspire questions, answers, and reflection — not only about my story, but about your own. The search for meaning is boundless, and art is often one of our best vehicles.”

View the full list of upcoming tour dates below.

Visit Ticket Club to find tickets to see Shinoda at a show this year. 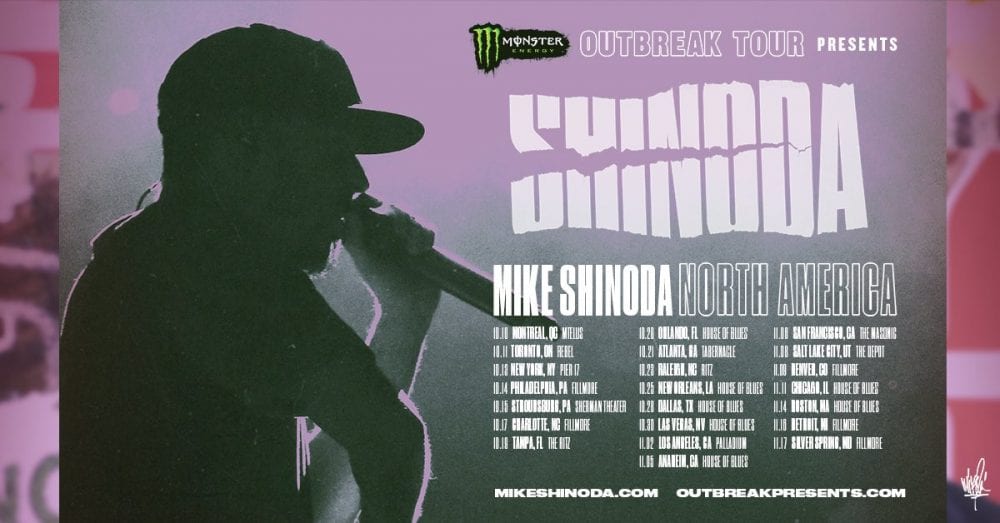