The indie-rockers of The Front Bottoms have teamed up with alt-rock group Manchester Orchestra for a co-headlining U.S. tour this winter.

Preceeding the jaunt, Manchester Orchestra will appear at Foo Fighters’ Cal Jam 18 in San Bernardino, California as well as Austin City Limits. The Front Bottoms can be found playing at Chicago’s Riot Fest and Sea.Hear.Now. Festival in their home state of New Jersey.

The co-tour will kick-off in Atlanta, Georgia on November 21 and will run through mid-December, making stops in Dallas, Detroit, Philadelphia, and Brooklyn, among other cities. They are slated to wrap-up the run in Lowell, Massachusetts on December 18, following a show at The Front Bottoms’ annual Champagne Jam. Additionally, the location for a mystery show on December 8 is TBA.

Manchester Orchestra released A Black Mile To The Surface in 2017, and dropped singles “I Know How to Speak,” “No Hard Feelings,” and “The Gold” earlier this year. The record follows 2014’s Hope and Cope from 2013. They are best-known for the track “I Can Feel a Hot One” off of 2009’s Mean Everything To Nothing.

Similarly, The Front Bottoms dropped a new LP last year titled Going Grey, just two years after they released Back On Top. The band’s top tracks include “Flashlight” from their debut self-titled record, as well as “Twin Size Mattress” from 2013’s Talon Of The Hawk.

Check out the duo’s tour dates below and visit Ticket Club to find tickets to a show this year. 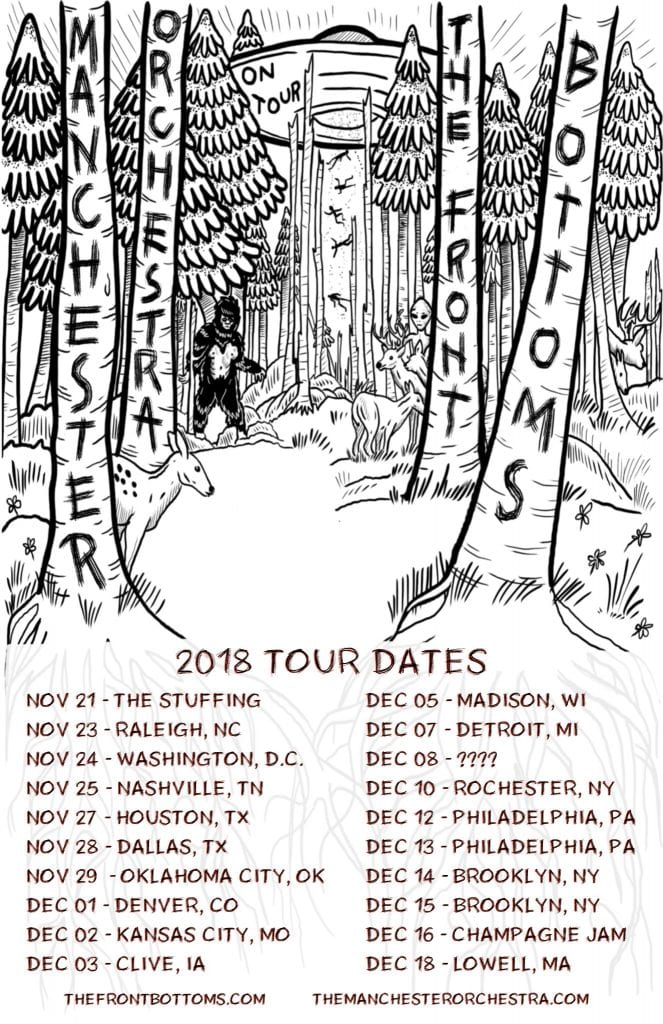