A number of concert and sporting events have been postponed or cancelled as the southeast prepares for the expected arrival of Hurricane Florence, currently a Category 4 storm. Alan Jackson, Zac Brown Band, and Jason Aldean are among the artists to call off performances, while a number of NCAA football games have already been moved or shut down entirely.

Currently, a Category 4 hurricane is headed toward the east coast, and the “probable” path is toward the southern North Carolina coast and the northern half of the South Carolina coast. It will also stretch through Georgia, western North Carolina, and Tennessee, the National Hurricane Center reports. The storm is also expected to bring heavy rain – in some spots, flooding can reach up to 40 inches – as well as high winds at 130 mph.

Below is a screen capture from the National Hurricane Center of Hurricane Florence’s expected track as of Wednesday. 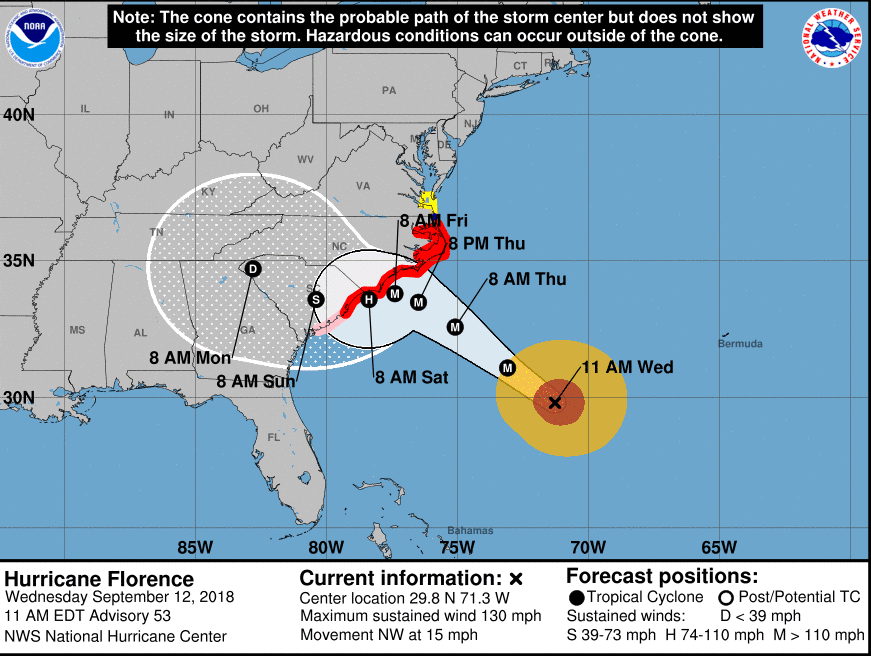 The Zac Brown Band concert at PNC Music Pavilion on Thursday in Charlotte, North Carolina has been cancelled, as well as the show at Coastal Credit Union Music Park in Raleigh. Live Nation announced that no makeup date will be scheduled, but refunds will be available at point of purchase.

Additionally, Alan Jackson’s upcoming Charlotte gig on Saturday at Spectrum Center has been postponed, and while the new date has not been announced yet, tickets will be honored at the new show. Other North Carolina cancellations include Steven Wright’s Saturday show at McGlohon Theater, Uncle Kracker’s gig on Friday, and the “4U” Prince celebration show at Raleigh’s Red Hat Amphitheater on Thursday. Festivals SPARKcon, BugFest, Apex Music Festival, and Soul Junction this weekend were also all cancelled.

The hurricane is even effecting shows in the north; Jason Aldean was forced to cancel Thursday’s gig in Cincinnati, Ohio due to an “unprecedented amount of rainfall” which caused the Ohio River to rise above flood stage. Aldean did not make note of a makeup show, but said refunds will be available.

Among all the cancellations, J. Cole’s Dreamville Festival is arguably the largest to be called off. The festival, which was supposed to take place Saturday in Raleigh, would have featured performances from artists like Cole, SZA, Young Thug, Nelly, Big Sean, and many more. While they had to call-off the fest for obvious safety reasons, organizers said that they hope to share details regarding a new event as soon as possible. Cole said that 30,000 people were expected to attend.

“J. Cole, Dreamville, ScoreMore Shows, and our entire festival team have been working with the City of Raleigh for more than three years to bring this new music event to life, so this is without a doubt one of the hardest decisions we have ever had to make,” the organizers said in a statement. “At the end of the day though, we truly love and care about our fans, and their safety and security will always be our number one priority.”

At least three high profile collegiate football games are also on the list, all taking place in North Carolina or Virginia. East Carolina’s trip to No. 11 Virginia Tech, No. 15 West Virginia at N.C. State and No. 18 Central Florida at North Carolina have all been postponed, though Sports Illustrated reports that no rescheduled dates have been set for any at this point. Wake Forest’s home game against Boston College has opted to move it’s scheduled start time up to 5:30 p.m. on Saturday. Virginia-Ohio University has been relocated further inland to Vanderbilt’s stadium in Nashville, as has Campbell-Coastal Carolina, which will be played at Campbell rather than on the coast.

Stay updated on events as the week progresses, as more cancellations are expected.

For a full list of closures across North Carolina, visit WRAL.