Del Mar Racetrack1 Ice Cube4 security8
A California man was shot by a San Diego County sheriff’s deputy on Sunday after pulling a gun and firing several shots after he...

A California man was shot by a San Diego County sheriff’s deputy on Sunday after pulling a gun and firing several shots after he was told he couldn’t buy a ticket to a sold-out Ice Cube concert later that evening, according to several outlets.

The man, identified as 22-year-old Daniel Elizarraras of Escondito, California, attempted to purchase the tickets at 6:40 p.m. at Del Mar Fairgrounds. When he found out that no tickets were available, he became upset and pulled out his weapon, firing several shots into the air before being engaged by the officers on site. After they attempted to subdue the suspect using tazers and had limited success, they opened fire. He is reportedly in stable condition at a local hospital and expected to survive.

“There was so much chaos when they started fighting,” witness Nicole Diaz told CBS8. “About 20 people were trying to pull other people off. It happened so fast. These were grown men fighting over six dollar tickets.”

She was just a few feet away from Elizarraras when he discharged his weapon while walking in a circle.

No other people were hurt in the incident. Within an hour, authorities had declared the incident as cleared, and the concert went on as planned. Elizarraras has been charged with assault on a police officer and illegal discharge of a firearm.

Ice Cube later tweeted a thank you to one fan’s post expressing their gratitude that the performers were all okay and that the show had gone on.

“Thank you. I feel bad for the people who left the show, but I totally understand,” he wrote. “Moral of the story: Come see ya homie Cube… but leave the strap at home.” 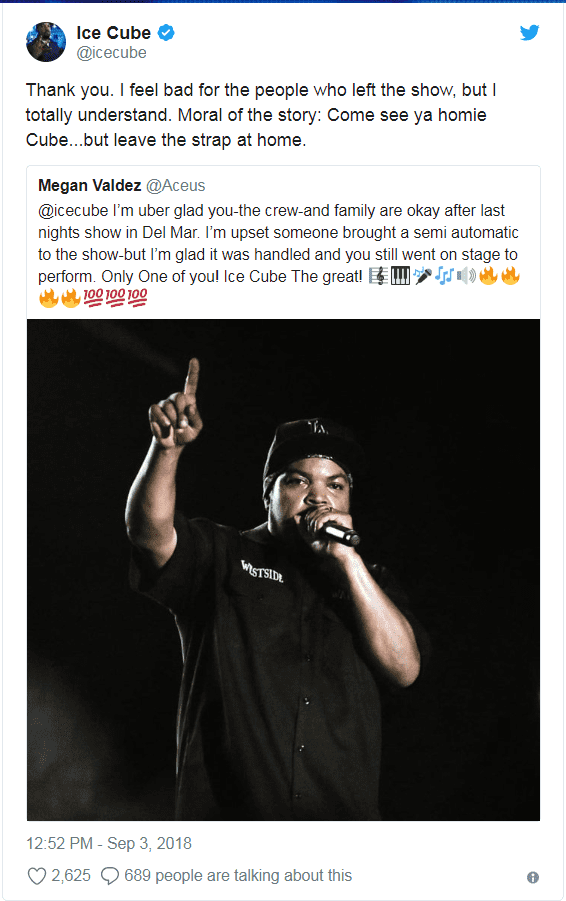 The show was the culmination of the action at the racetrack for the day. Admission was free for those who had paid for admission to the track prior to the last race (which costs as little as $6, explaining Diaz’s reference in the quote above). Tickets purchased separate from race admissions began at $30, but the available spots were sold out. Attendance on Sunday was reportedly the second-largest of the season, with close to 31,000 people passing through the turnstiles. Many fans were reportedly headed towards the venue following the conclusion of the final race of the day, despite the fact that the estimated 18,000 available seats were long ago filled by patrons already at the venue.

Del Mar Racetrack officials said they will review existing security policies in the wake of the incident. Currently, there are no metal detectors used in the security screening process. “We work with law enforcement about what they would like to see us do and how to handle it,” Del Mar Thoroughbred Club CEO Joe Harper told the San Diego Union Tribune. “Obviously we’ll go back to the drawing boards with this thing happening and talk about it. We really rely on local law enforcement to tell us what they feel is necessary.”