John Legend has announced the release of his first Christmas album, along with a string of tour dates in support of the LP.

A Legendary Christmas, which was produced by Raphael Saadiq, is due October 26 via Columbia Records. The 14-track album will feature hit holiday tunes like “Silver Bells” and “Christmas Time is Here,” as well as a cover of Marvin Gaye’s “Purple Snowflakes.” The record also features Stevie Wonder playing harmonica on the opening track “What Christmas Means to Me” and jazz bassist/singer Esperanza Spalding on “Have Yourself a Merry Little Christmas.”

Following its release, Legend will head out on a 25-date cross-country tour, kicking-off in Clearwater, Florida on November 15. Along the way, he will make stops in cities like Detroit, Toronto, Boston, Milwaukee, Atlantic City, and Oakland before wrapping-up in San Diego, California on December 30.

The LP follows 2016’s Darkness and Light and 2013’s Love In The Future. Since his latest record, he released a handful of songs, including the 2018 track with BloodPop, “A Good Night.” He is best-known for tracks “Love Me Now,” “Ordinary People,” and the smash-hit “All Of Me” which garnered nearly one billion streams.

Legend has broken records by becoming the first youngest and black man to be an EGOT winner – the star has won Academy, Emmy, Grammy, and Tony Awards, joining the small list of 15 other EGOT winners.

Check out his full list of upcoming tour dates below. 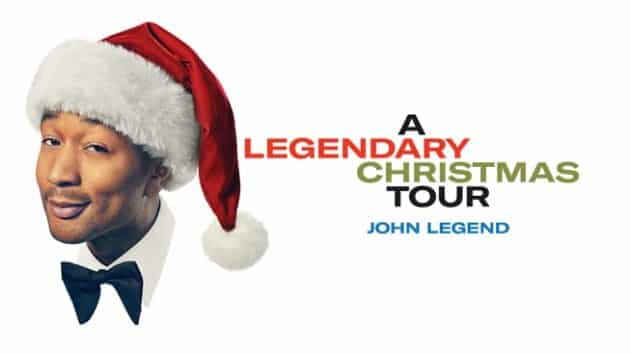