Mac Miller’s family announced a concert to honor the late rapper later this month, which is set to feature a diverse range of artists.

Malcolm McCormick, known as Mac Miller onstage, had just released the LP Swimming in August. Early last month, he died at 26-years-old from an apparent drug overdose, although the official cause of death is undetermined. On Tuesday, his parents and brother revealed “Mac Miller: A Celebration of Life” concert that will not only pay tribute to the rapper, but will launch a new charity in honor of his life.

A portion of ticket sales will go toward The Mac Miller Circles Fund, which will benefit programming, resources, and opportunities for children in suffering communities to “help them recognize their full potential through exploration in the arts and community building.”

The concert, set to take place on October 31 at Los Angeles’ Greek Theatre, will feature performances from a handful of his friends and peers, including Chance the Rapper, John Mayer, Travis Scott, Miguel, SZA, Schoolboy Q, Vince Staples, Ty Dolla $ign, and more.

“The support we’ve experienced is evident in this amazing line-up and is a testament to Malcolm’s incredible life,” Miller’s mother, Karen Meyers, said in a statement. “His father, brother and I are beyond thankful to everyone who is working to make this concert happen along with every fan and every friend for continuing to support Malcolm and his vision.

“He was a caring, loving human with a smile that could light up the sky and a soul that was out to make the world a kinder place and the MMCF will continue to do just that.”

Check out the concert poster below: 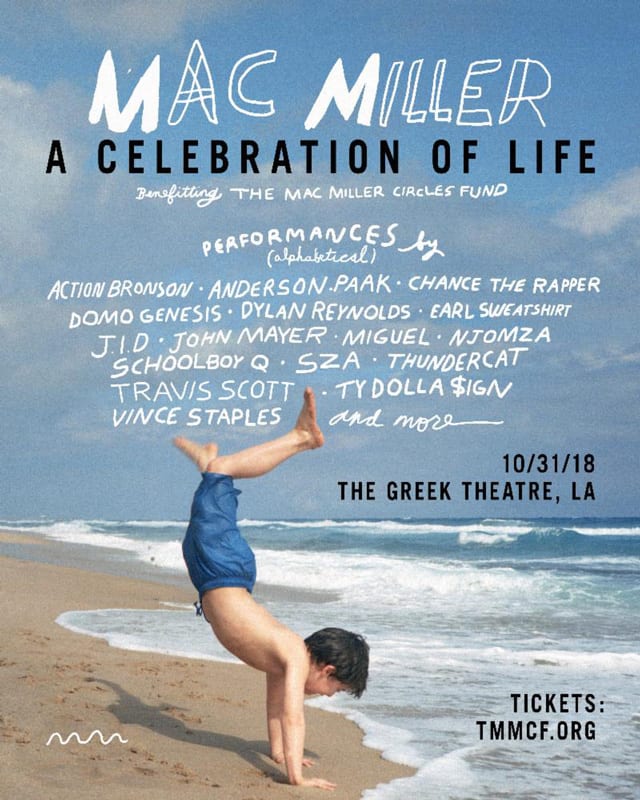