The band Hanson had to cut their performance short at Williamsburg Winery on Sunday afternoon due to winter storm conditions.

Hanson were performing as a part of the Uncorked and Unplugged show with Brynn Elliot and Heather Murphy, presented by radio partners 94.9 The Point, 101.3 2WD, and Mix 98.1 Richmond.

Although the group posted online that they were feeling festive with the winter snow, their minds quickly changed as the weather grew heavier. They ended the set early, and just after fans cleared the tent, it collapsed under the weight of the snow. According to 10 On Your Side, the James County Fire Department confirmed there were no injuries. 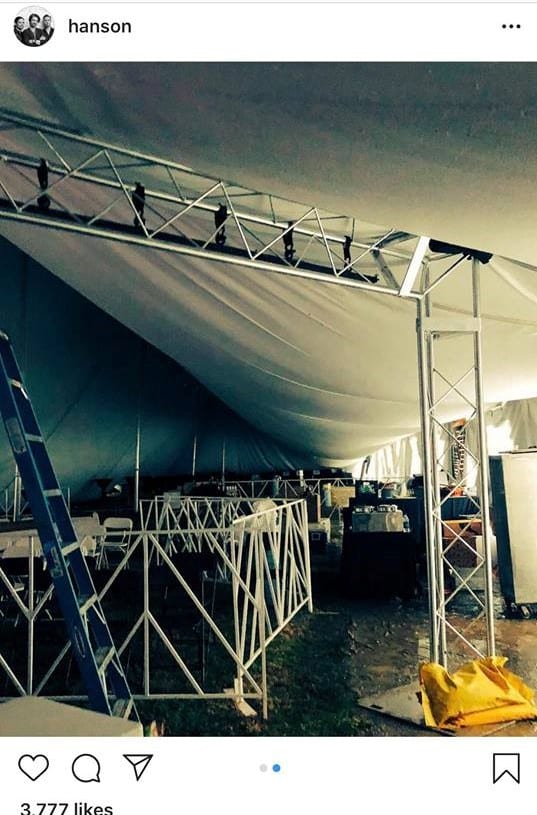 During the storm Sunday, five inches of snow accumulated, causing fans to get their vehicles stuck in the parking lot. One fan told 10 On Your Side that there were hundreds of cars stuck in the snow and strangers helped her push her car out to the road.

Williamsburg Winery posted an apology on their Facebook page for the people who attended the show.

“The weather conditions that arose unexpectedly after the forecast called for a dusting to a 1/2 inch of snow followed by rain, certainly brought about some challenges,” the post read. “Our primary focus all day, especially when the snow increased, was to make sure everyone got out of the venue safely.

“We are so grateful for our Winery team, our Radio partners and our community partners at James City County for working tirelessly all day monitoring the situation and taking the necessary measures to ensure everyone’s safety. A huge thank you to you, the fans, for your passion, feedback and for braving the elements and being patient during the snowfall. We know that the elements brought about less than ideal situations and unexpected circumstances.”

Fans were still upset with their sub-par experience and have requested refunds. While people were annoyed with the weather and the short show, they also noted that the event was advertised as an intimate Christmas show, which it wasn’t. Others argued they paid $100 for a VIP ticket but barely got to see Hanson perform.

Williamsburg Winery told fans that their radio partners provided this number for concertgoers to call with questions about refunds: 757-965-2368.

This was Hanson’s last concert of 2018, however, they have a handful of shows next year on their symphonic tour in support of their latest record, String Theory. They are due next in Fort Worth, Texas on January 5, followed by shows throughout Europe and the UK in February and March before heading back to the states for gigs in Oklahoma and New York.