A country music festival, set to take place next month in honor of the 1 October victims, has been canceled, leaving fans feeling ripped-off and uneasy about receiving refunds.

The event, dubbed 24 Hours of Country, was supposed to be held from May 10 to 12 at Craig Ranch Regional Park in North Las Vegas, however, the company said the concert will take place at a new date. Would-be concertgoers expressed their concern on social media in the weeks leading up to the show, claiming that the business hadn’t released a lineup and no show time was announced. Ticketholders had shelled out $50 for one-day wristband tickets or 3-day passes for $125 or more, KTNV reports.

Food vendors were also confused about the concert, since organizers had not released official information. One prospective vendor, Nebojsa Krkeljas of Prince Cafe Restaurant, told KTNV that they were in contact with the festival director Sarah Summers. Krkeljas said Summers declined the restaurant’s offer to send in a check and wanted $1,600 in cash.

“[Summers] never gave us the official information, so that’s why for me, it was a little bit weird,” Krkeljas said.

The festival did not return KTNV‘s requests for comment. However, on the festival’s website, which is completely blank aside from a bolded statement on the home page, organizers note that they will “no longer defend itself against the false reports in the news agencies and will no longer grant any statements, interviews, or any other type of contact by any news media.”

It goes on to say that a concert was held on February 23 by 24 Hours of Country and less than 100 people showed up, resulting in a 24-hour loss. The May festival was “never advertised as an October 1 Benefit Concert as false reports made that it was,” but instead, the organization was going to make a donation to various October 1 charities. Additionally, they claim more than 14 bands were booked for the event, which festivalgoers knew about.

“Two months ago all wristband sales were removed from Eventbrite although the event was left on the site for the advertising and One week ago a decision was made to cancel and reschedule the festival and at that point all wristband sales were removed from the 24 Hours of Country Website, unlike a false news report that said wristbands were still being sold!” the statement read.

According to the statement, refunds will be processed starting the week of April 29 and all refunds will be sent in certifed funds to the name and address of the person that made the purchase. It also notes that 180 wristbands were sold, and thanks buyers for “at least [giving] the festival a shot.”

Ticketholders expressed their frustration on the event’s Facebook page, confused by the message. 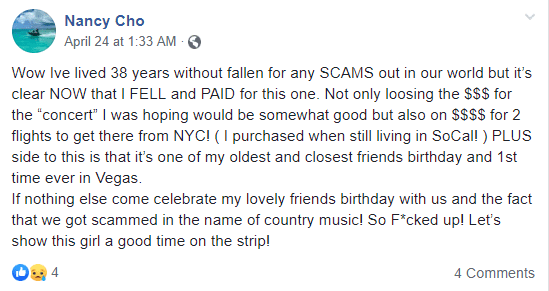 According to News 8 Now, the festival’s CEO Michael Netherton told reporter Darlene Melendez that the festival would be rescheduled to a weekend in September, but many ticketholders claim that if the concert really is rescheduled, they won’t attend.