Disney Theatrical Productions2 Hollywood Bowl9 Lea Michele7 Production1 The Little Mermaid2
Glee star Lea Michele will take on the role of the Disney Princess Ariel this May for a pair of special 30th anniversary live...

Glee star Lea Michele will take on the role of the Disney Princess Ariel this May for a pair of special 30th anniversary live productions of The Little Mermaid at The Hollywood Bowl.

The shows, dubbed a “Live-To-Film Concert Experience,” are set to take place on May 17 and 18 in Los Angeles. Michele will be joined by Leo Gallo as Prince Eric, Ken Page as the quirky sidekick Sebastian, Peter Gallagher as the strict father King Triton, and Harvey Feirstein as the beloved villain Ursula. A live orchestra will help the cast recreate the classic story on stage, revolving around Ariel’s transformation to a human and her love story with Prince Eric.

This isn’t the first live concert performance of The Little Mermaid; the show first debuted three years ago at the Bowl, yet each year, the group tries to one-up the last production. This time around, the Bowl will be transformed into the “Hollywood Fish Bowl Dive-In Theatre” through digital projection mapping with “living scenery” on the venue’s shell to bring the sea theme to fruition, the Los Angeles Times reports.

Additionally, the show will provide aquatic-themed inventions, underwater-themed coming attractions, and animated snack-bar commercials. Ahead of the show, there will be a screening of the 1938 Symphony cartoon “Merbabies” where 17-year-old pianist Emily Bear will premiere her original score and composition live.

One thing that will definitely remain the same during the production is the music. Fans can expect to hear iconic songs like “Kiss The Girl,” “Under The Sea,” “Part of Your World,” and “Poor Unfortunate Souls” from the movie’s 1997 Oscar and Grammy award-winning soundtrack.

Grab your tickets to the show via Ticket Club. 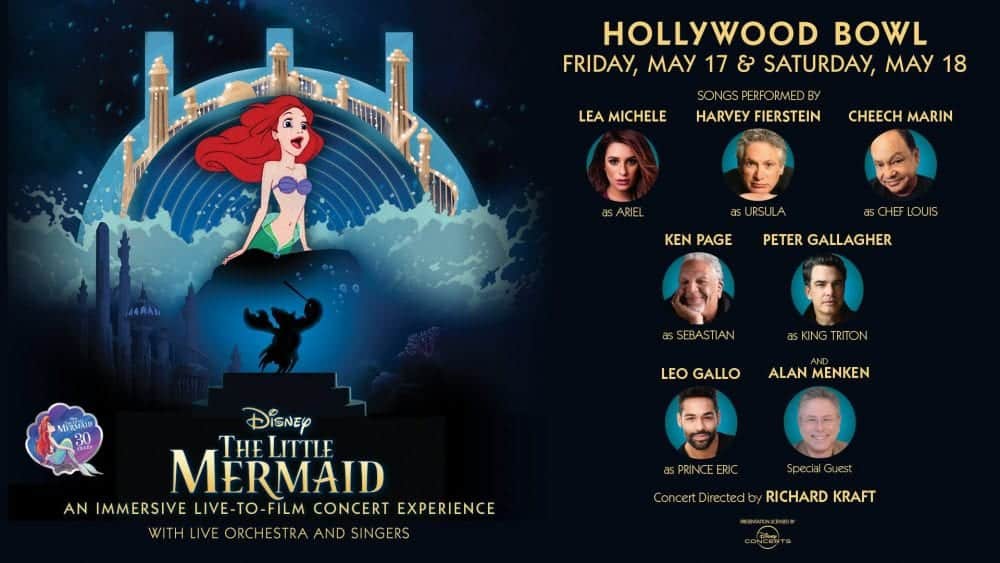