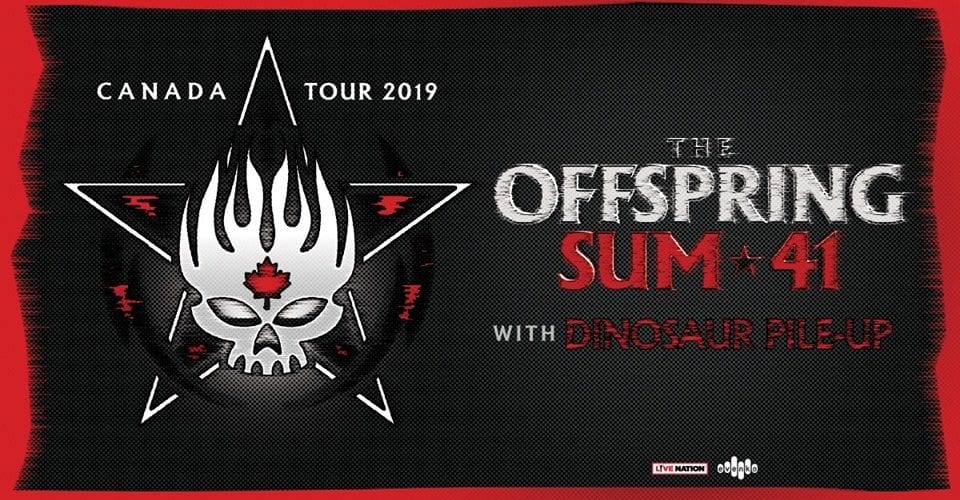 The iconic punk-rockers of The Offspring and Sum 41 are teaming up for a Canadian tour this fall.

The tour kicks-off on November 12 in Halifax, Nova Scotia, followed by gigs in Moncton, Sault Ste Marie, Estevan, and Cranbrook. They’ll appear at Place Bell in Laval, Bell MTS Place in Winnipeg, and South Okanagan Events Centre in Penticton before wrapping-up in Kamloops, British Columbia at the Sandman Centre early December. Throughout the outing, Dinosaur Pile-Up will provide support.

Sum 41, best-known for early 2000’s hits like “In Too Deep” and “Fat Lip,” just dropped the record Order in Decline, which features the lead single “Out for Blood” and follows 2016’s 13 Voices. The group will head out on a headlining tour this fall with The Amity Affliction and The Plot In You this October.

The Offspring, on the other hand, will be touring in support of their forthcoming 10th studio album, which has not been announced at this time. The LP will follow 2012’s Days Go By, which features “Slim Pickens Does The Right Thing and Rides the Bomb To Hell,” “Days Go By,” and “Dirty Magic.” They are best-known for the track “You’re Gonna Go Far, Kid” from 2008’s Rise And Fall, Rage And Grace, as well as 1998’s “The Kids Aren’t Alright,” “Pretty Fly (For A White Guy),” and “Why Don’t You Get A Job” from Americana.

Check out the duo’s full round of tour dates below.