Alabama’s Student Government Association is defending itself against claims it is threatening violations of student’s first amendment rights over President Donald Trump’s planned attendance at today’s showdown between its football team and Louisiana State, according to multiple outlets. Earlier this week the SGA sent a note to all students regarding heightened security at the event, but also intoned that any protests mounted by students in the stands would result in the cancellation of their rights to student tickets for the remainder of the year.

“Any organizations that engage in disruptive behavior during the game will be removed from block seating instantly for the remainder of the season,” is what the letter, signed by Vice President of Student Affairs Jason Rothfarb and sent on Wednesday, read.

Some felt this warning to be an attempt at the suppression of free speech rights of students, particularly in light of recent events where the President was booed by crowds at the World Series in Washington, D.C. as well as a UFC event in New York. 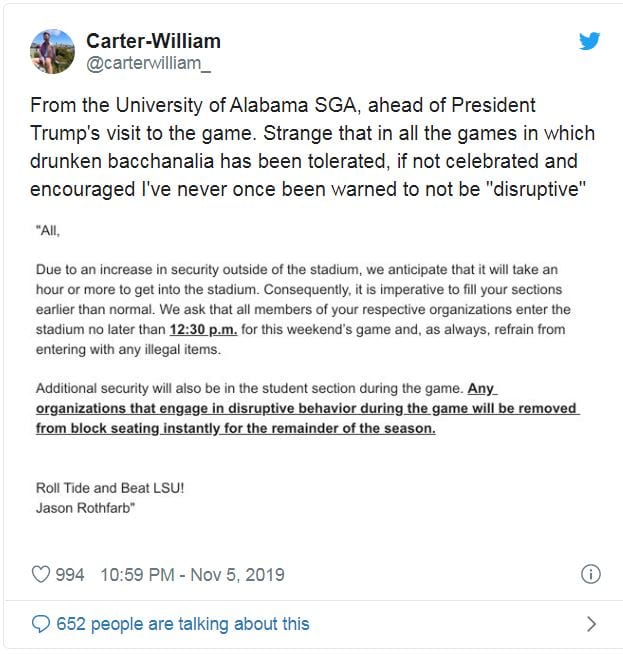 The SGA, however, contends that the warning was not intended to stifle any speech – only to remind students of the consequences of behavior inherent to any events they attend.

“Some have misinterpreted my comment regarding “disruptive behavior…,” Rothfarb wrote in a follow-up after negative coverage. “By disruptive behavior, we are asking students to be respectful to all students and staff and avoid altercations. My email has nothing do with anyone’s First Amendment rights and I am sorry for any confusion. Please express yourself and especially your pride for the Tide.”

“The SGA strongly affirms its belief in free speech and the rights of all students to express their opinions,” read another letter in response to the controversy, this one from SGA Press Secretary Jackson Fuentes. “Today’s report erroneously assigned a political context to a message meant only to remind students about heightened security and the consequences of altercations or other behaviors unbecoming of a University of Alabama student, as defined in the Capstone Creed. We look forward to cheering on the Crimson Tide, alongside the student body, on Saturday afternoon.”

Fuentes did, however, confirm that no such warnings had been issued for any prior games this season.

Saturday’s game is expected to bring some of the highest prices of the year on the secondary market, as the Crimson Tide play host to the Tigers in an SEC battle with major College Football Playoff implications. Both are unbeaten thus far, with Alabama No. 3 in the current CFP rankings, just behind LSU at No. 2. The winner stands a very real chance of vaulting into the top spot, ahead of No. 1 Ohio State, though plenty of football remains to be played on the season.