Festivalgoers who attended the elusive EDM event Electric Forest previously can buy tickets early, depending on their attendance record.

Although the official lineup will not be announced yet, tickets are set to head on sale next week. Tickets include general admission wristbands, “Good Life” Village camping VIP, “Back 40” VIP camping in an exclusive area, Frontier Suites, and RV camping. People who have attended the event in the past, however, will have a slight advantage, with the opportunity to buy tickets as early as December 4 or 5 if they registered for a “loyalty code.”

Organizers revealed this week that these loyalty codes will be emailed to Forest “family” attendees who qualify in advance. Those who have already attended and registered their wristband for six previous years – the “highest level of loyalty at Electric Forest” – can enjoy the lowest price on GA and Good Life Wristbands, as well as priority access to lodging packages and early entry into the venue. This special pre-sale will begin at 10 a.m. EST. on December 4. Those who have attended and registered their wristband for four previous years will receive a discount on GA and Good Life Wristbands and can purchase presale tickets at 2 p.m. EST on December 4.

Anyone who registered for a Good Life wristband in the previous year can purchase tickets on December 5 starting at 10 a.m. EST, followed by a GA Loyalty presale at 2p.m. EST for those who registered a GA camping wristband in the previous year. All new festivalgoers can begin purchasing tickets during the general on sale on December 6 at 10 a.m. EST.

The 2020 edition of the festival – marking the 10-year-anniversary – will take place from June 25 to 28 in Rothbury, Michigan. The festival, which includes a music lineup, art installations, film screenings, and health and educational programming, will reportedly be “the biggest Forest celebration to date.”

“The #ForestFamily turns the page to chapter 10,” organizers said in a statement this week. “This anniversary, however, will not be focused on the past, but is instead a time to look forward. Above all, this is an occasion to celebrate the unique moment in time between decades.

“Stop, look, listen, and join together in the biggest Forest celebration to date. Spread the word. Decade One is happening.”

See the full list of onsales times and dates below, based on attendance records. For more information, visit the festival’s site. 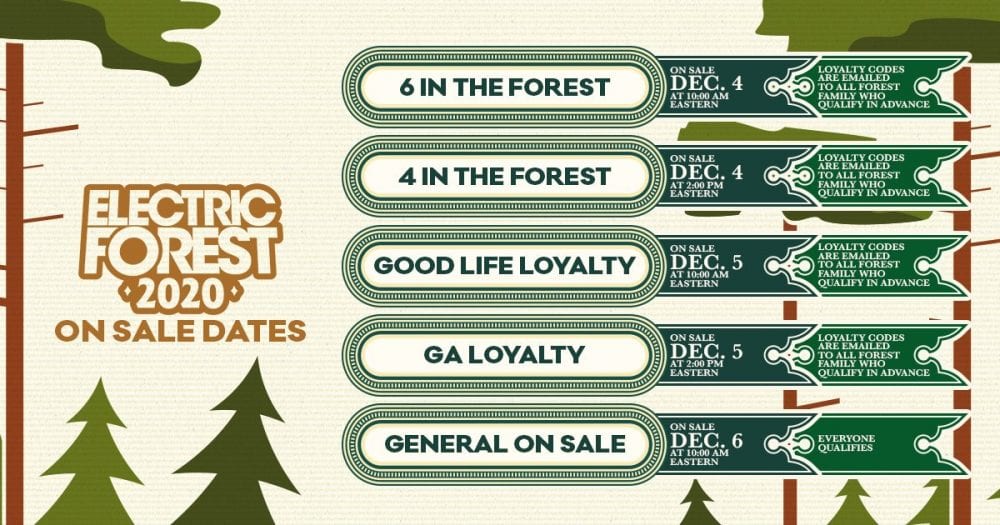