Tool Threatens Ejection for Fans Who Use Phones During Shows

Tool Mobile-Only1
Tool issued a stern warning for a recent show at Cleveland’s Rocket Mortgage FieldHouse, informing fans that their no camera policy didn’t exclude those...

Tool issued a stern warning for a recent show at Cleveland’s Rocket Mortgage FieldHouse, informing fans that their no camera policy didn’t exclude those with cell phones – and could result in their ejection without a refund should they be caught using the devices during the performance.

“We respectfully request that you please watch and listen to the show, not your phone,” reads an email sent to fans prior to the event that one posted on Reddit. “You will be ejected from the show without the opportunity to return and without a refund if you violate this simple request and take photos during the performance.” 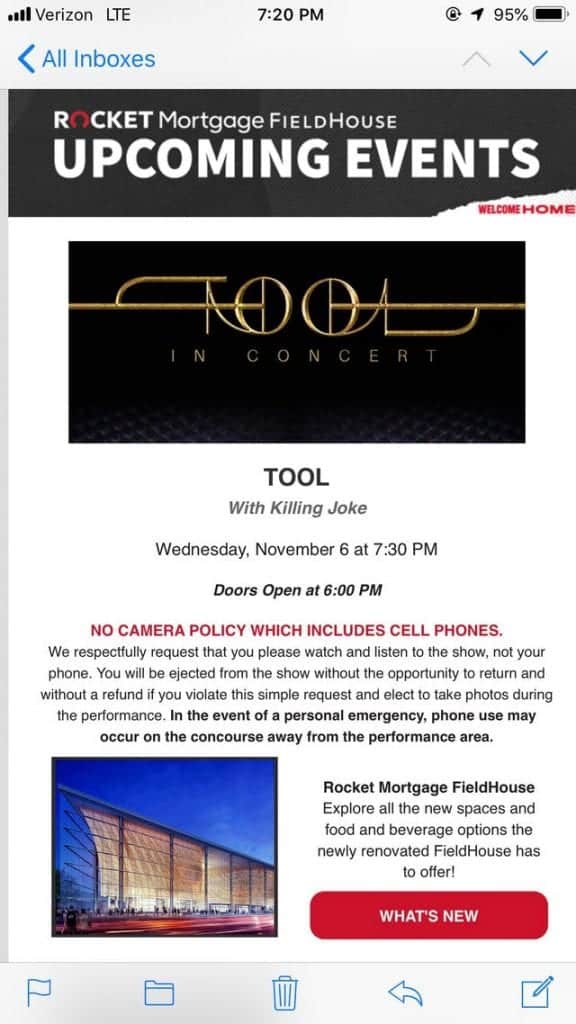 The Reddit thread includes several fans harping on how stringent the policy seems to be. The headline even pokes fun at the overbearing nature of the warnings: “No Cameras” is printed on the tickets, posted at every spot possible at the venues, posted by the fern, now I got a email reminding me no cameras. When is Maynard going to call me with a reminder?”

User giftw replied “They were merciless at Barclays for the AQPC show a while back so they’ll probably be again this time. Kind of a shame because I found the security swarm more distracting than a couple of phones but alright…”

Adding an ironic twist, the venue uses the Flash Seats system, meaning a large number of the patrons likely entered the building using the very device which could potentially get them kicked out if it made an appearance later in the performance. Flash Seats is a paperless system, meaning consumers can enter the venue either with a credit card or “digital ID” like some driver’s licenses, or using the app itself on their mobile device.

Tool’s tour continues with shows tonight and tomorrow night at Toronto’s Scotiabank Arena. The camera policy is not spelled out on the ticketing page, but the only option for fans who want to purchase last-minute tickets is mobile-entry.