31120 Festival Lineup57 music festival234 sandjam2 Shinedown19 Weezer21
The rockers of Shinedown, 311, and Weezer are heading to Panama City Beach to headline the third edition of the annual SandJam rock festival...

The rockers of Shinedown, 311, and Weezer are heading to Panama City Beach to headline the third edition of the annual SandJam rock festival next year.

The festival, set to take place from April 24 to 26, will feature two massive stages over three days with two stages facing each other at opposite ends of the beach. Artists will alternate between the two so there is little downtime between performances – creating a non-stop music environment over the three days. SandJam COO Mark Sheldon said that transforming the area into a music venue each year is “fascinating,” as organizers use the same material used by the military to build temporary roads to accommodate for the heavy equipment and gear.

“To be able to hit the ground running with a lineup like this is incredible,” executive producer Rendy Lovelady said in a statement. “The headliners along have over 12 million social media followers, so we’re anticipating thousands of avid fans heading to PCB in April.”

Shinedown, the rockers best-known for early 2000s staple rock tracks like “Second Chance” and “Sound of Madness,” just wrapped-up a tour in support of their 2019 record, Attention Attention. The group behind “Say It Ain’t So” and “Beverly Hills,” Weezer, will be performing amid their recently-announced Hella Mega Tour with Green Day and Fall Out Boy, while the “Beautiful Disaster” group 311 will be returning to the scene following the release of Voyager this past summer.

Other acts like the English glam rock group The Struts, pop group AJR, and the hard-rock group Skillet will hit the sand, along with Judah & The Lion, Rival Sons, Manchester Orchestra, Lovelytheband, and Sir Sly. Rising acts like Heritage, Sleepwalker, and Magic City Hippies are also among the bands taking the stage.

In addition to the music, foot and drink vendors will fill the M.B. Miller parking lot, along with clolthing and craft shops. See the full list of performing artists below. 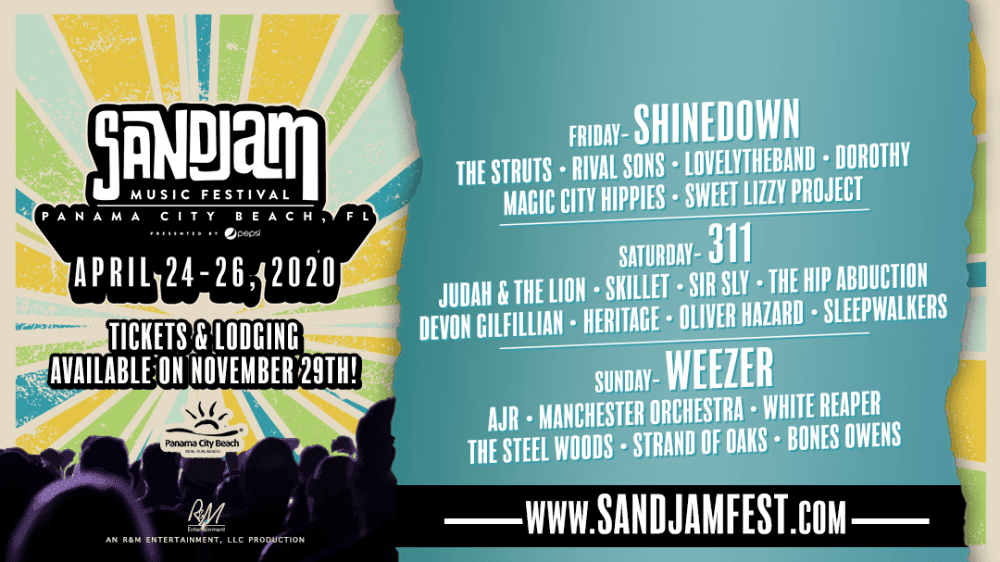