Dave Grohl and company will kick off the three-day gathering with a headlining set on Friday May 22. The newly-reunited Rage Against the Machine and Red Hot Chili Peppers will perform Saturday and Sunday, respectively. Other artists set to appear throughout the weekend include Jason Isbell, The 1975, Brittany Howard, The Struts, Liam Gallagher, Banks and Run the Jewels, as well as a number of comedians.

The annual festival, which takes place at the Harvard Athletic Complex, made waves in November when the Foo Fighters and Red Hot Chili Peppers were announced as headliners. At the time of that early reveal, Boston Calling co-founder and CEO Brian Appel expressed the festival’s appreciation for the prolific rockers and previewed a diverse event.

“Boston is such a great city for rock music, and we are so proud to bring some of the most important rock artists of all time to Boston Calling next Memorial Day Weekend,” Appel said in a statement upon the initial announcement. “We have worked for years to bring the Foo Fighters and Red Hot Chili Peppers to the festival, and this year everything lined up perfectly. We couldn’t be happier, and will complement them with an incredibly diverse lineup of artists throughout the festival weekend.”

Rage Against the Machine’s headlining slot may not have been confirmed until now. However, the gig hardly comes as a surprise given the band’s slate of festival appearances amid their latest reunion. The California-based group will deliver their second headlining set at Coachella in April, and were confirmed to headline Delaware’s Firefly Music Festival this June in addition to the Boston Calling lineup. Their upcoming string of shows mark the band’s first live performances in nearly a decade.

See the full Boston Calling lineup and daily schedule in the official festival poster below. 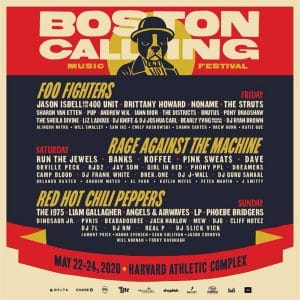