Memphis’ Beale Street Music Festival will welcome a diverse lineup of artists to the stage this spring. The festival, now in its 44th year, will feature headlining performances from Lil Wayne, Weezer, The Avett Brothers, DaBaby, The Lumineers, Three Six Mafia, The Smashing Pumpkins and The 1975. Mavis Staples, 311, Brittany Howard, Leon Bridges, Liam Gallagher, Of Monsters and Men and Lindsey Buckingham are among dozens of others slated to appear.

The three-day festival kicks off Friday, May 1 at Tom Lee Park with performances from The 1975, Smashing Pumpkins, DaBaby and more. Three Six Mafia, 311 and The Lumineers highlight Saturday’s concert schedule and the bash will wrap with concluding performances from Lil Wayne, Weezer and The Avett Brothers on Sunday, May 3.

For many of this year’s participating artists, Beale Street Music Festival falls in line with busy touring schedules. Lindsey Buckingham has Beale Street sandwiched in between his spring tour dates, while The Lumineers will be on the road through much of the summer. Billy Corgan and The Smashing Pumpkins will perform in stadiums shortly after their visit to Memphis as they join The Rolling Stones’ No Filter Tour.

Meanwhile, The 1975’s confirmed performance slot comes in conjunction with frontman Matt Healy saying the band will only play gender-balanced festivals going forward. Like many of their fellow Beale Street performers, the British pop-rockers have several North American tour dates booked throughout the spring and early summer. 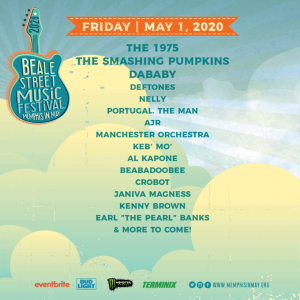 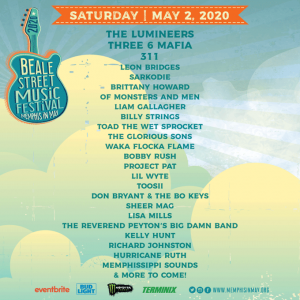 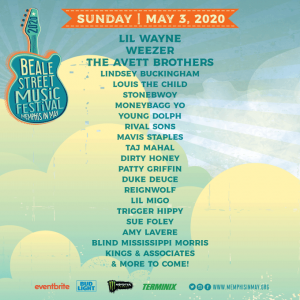