Now entering its third year, the two-day festival will take place at Auto Club Speedway in Fontana, California on August 15-16. As its name implies, Tailgate Fest places a strong emphasis on the pre-concert tradition and invites fans to kick back and enjoy the show and tailgate activities simultaneously.

“One of the best parts of Tailgate, and also most unique, is that it compels people to engage in a visceral social interaction which has become harder and harder to find,” festival founder Melissa Carbone said in a statement. “Even our artists walk around and grab beers and pop in to see the action, which is pretty unheard of at most festivals. It’s becoming such a community of camaraderie based around the love of music, tailgating and camping culture, summer, love and fun.”

For many of Tailgate Fest’s 2020 performers, they are booked solid for months to come. Lynyrd Skynyrd’s Last of the Street Survivors farewell tour is still going strong with dates running through the summer, including festival gigs like Daytona Beach’s Welcome To Rockville, Country Thunder Iowa, and North Carolina’s Epicenter Festival. Meanwhile, Bentley’s schedule is heavily focused on music festivals. Before taking the stage at Tailgate Fest, the country star will play Virginia Beach’s Patriot Festival, the inaugural Trailblazer Festival and next month he’ll headline at the Houston Rodeo.

See the full Tailgate Fest lineup and daily performance schedule in the official poster below. 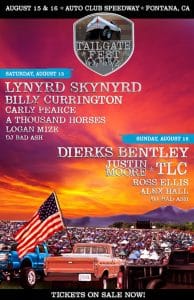