Grammy winners Maren Morris and Jason Isbell lead the slate of artists heading to Kentucky’s Railbird Festival. The fest returns to the Grounds at Keeneland in Lexington for its second edition August 22-23 and offers performances from top country, alternative and Americana artists.

Morris and Isbell (along with his band The 400 Unit) will serve as the weekend’s headliners and be joined by Tanya Tucker, The Decemberists, Young The Giant, Whiskey Myers, The Head & The Heart, Trampled By Turtles and dozens more. In addition to its eclectic musical lineup, the two-day bash will also feature bourbon and food tastings plus race horse betting.

For many of this year’s performers, Railbird Festival is the cherry on top of busy tour schedules. Isbell and The 400 Unit recently announced their upcoming album Reunions and subsequent tour that stretches through the fall. The Head and The Heart as well as The Decemberists have several tour dates lined up as they support their various projects. Meanwhile, Morris has scarce performances booked as she is expecting her first child in the coming weeks. She’ll headline the Houston Rodeo next month and will make her first appearances as a mother at BottleRock Festival and Governors Ball this spring.

Railbird Festival is produced by David Helmers and AC Entertainment, which recently became the latest promoter to be acquired by Live Nation. It welcomed Mavis Staples and Brandi Carlile as its inaugural headliners last year as well as Kentucky native Tyler Childers. 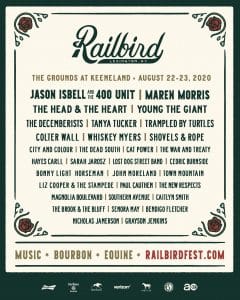