Justin Bieber fans in Ohio are feeling confused after ticket sales for his Changes Tour in Columbus and Cleveland have been postponed.

Presale tickets for the tour went on sale February 13 and many fans secured tickets. The general sale began on Friday, however, Ticketmaster posted a statement on its site noting that the general public on-sale for Cleveland and Columbus would be delayed due to “logistical production concerns.” The shows were supposed to take place on August 8 at Columbus’ Ohio Stadium and August 14 at the FirstEnergy Stadium in Cleveland. 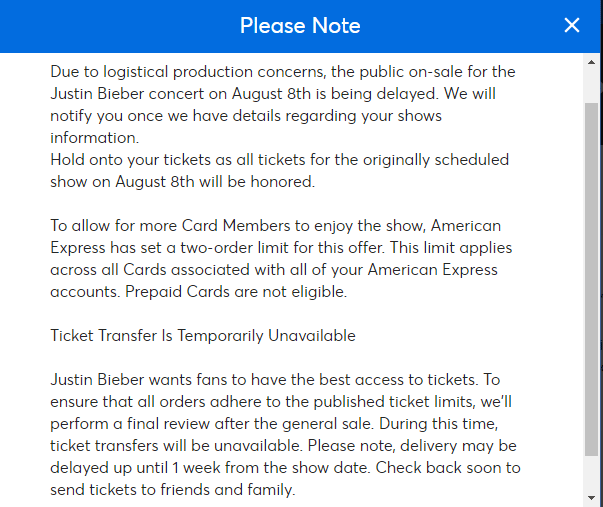 “Due to logistical production concerns, the public on-sale for the Justin Bieber concert on August 8th is being delayed,” the statement read. “We will notify you once we have details regarding your shows information. Hold onto your tickets as all tickets for the originally scheduled show on August 8th will be honored.

A similar statement was issued for the Cleveland show. As of Sunday, Bieber’s official site no longer lists either Ohio tour stops. Ticketmaster, however, still has the shows listed, with a message that reads: “On sale date and time are in the works – please check back!”

One of the region’s ticket resellers, Merk’s Ticket Agency, believes that the delay in ticket sales has to do with Bieber’s low demand for tickets, rather than logistical issues. Scott Merk of Merk’s Ticket Agency told Cleveland.com that The Rolling Stones’ tour went on sale the same day with the same promoter and didn’t have logistical problems, noting that while the Stones’ shows are hot right now, “the Bieber tour is very weak.”

“For Cleveland, with his fanbase, he should be playing no bigger than Rocket Mortgage Fiedhouse at the max,” Merk said. “But in reality, he’s probably better suited for Jacobs Pavilion, which has a capacity of 5,000.”

Changes, Bieber’s fifth studio album, dropped this past Friday. The LP, which features his latest single “Yummy,” follows 2015’s Purpose. His North American tour, supporting the new record, kicks-off on May 14 in Seattle.