The country bash, which is set to run July 31-August 2 at the Gorge Amphitheatre in Washington state, will also welcome Kelsea Ballerini, Jon Pardi, Lindsay Ell, and Billy Currington to its stage. Pop star Colbie Caillat will make her Watershed Festival debut with her country outfit Gone West, while Randy Houser, Russell Dickerson, Blanco Brown, Hardy and Travis Denning will also appear. Additional artists are expected to be announced in the coming weeks.

“Watershed, to me, is all about the annual anticipation of a great weekend with 26,000 friends, in one of the most beautiful settings on Earth,” Brian O’Connell, president of Live Nation Country Touring revealed in a statement. “I feel like it is a privilege to not only get to go, but to share it with so many ‘Shedders that have been there since day one. These artists, that setting, and the ‘Shedders make Watershed more than just a festival, it’s a true rite of passage for country music fans, and I am so proud to host this event every year.”

The festival’s trio of superstar headliners each have a busy year ahead of them. Thomas Rhett, who recently became a father of three, will launch his Center Point Road Tour in May and remain on the road through August. His schedule also includes headlining gigs at Stagecoach Festival, Cheyenne Frontier Days, Faster Horses Festival, and Trailblazer Festival.

Bentley has sporadic festival and stand-alone performances planned. His most notable bookings include the Houston Rodeo next month and an appearance alongside Rhett at New York’s Trailblazer Festival. Fellow Houston Rodeo performer Urban will be primarily based out of Las Vegas in the coming months as he surges forward with his first residency show at Caesars Palace Colosseum.

Bentley and Rhett both performed at the inaugural Watershed Festival in 2012, while Urban served as a headliner at the 2016 edition. 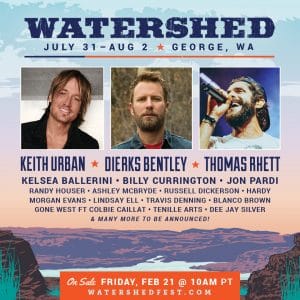