Covid-1955 Trump2
With the number of Americans under statewide “shutdown” orders designed to slow the spread of the Covid-19 pandemic approaching 100 million, President Trump and...

With the number of Americans under statewide “shutdown” orders designed to slow the spread of the Covid-19 pandemic approaching 100 million, President Trump and other conservatives are expressing a desire to get things back to normal as soon as possible to mitigate the potential economic damage could bring should it continue long term.

“Our country wasn’t built to be shut down,” Trump said at a briefing Monday. “America will, again, and soon, be open for business. Very soon. A lot sooner than three of four months that somebody was suggesting. Lot sooner. We cannot let the cure be worse than the problem itself.”

He also tweeted (in full CAPS) that the end of the current 15 day period of “slowing the spread” might be the boundary after which business as normal should begin to return. 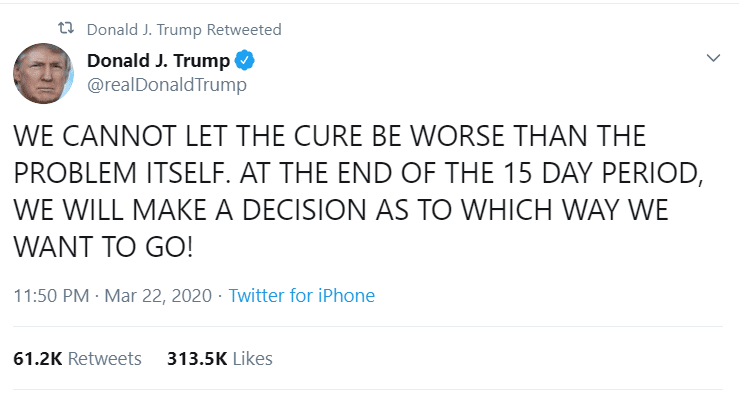 Public health officials are pushing back against the concept of a quick end to the measures that have been enacted such as social distancing and limits to the size of gatherings – which have ground live entertainment to a halt – saying that doing so would be risking the health of millions and the stability of the country’s medical systems. Much of the logic behind the shutdowns is based on slowing down the spread of infection to limit how many people might need medical facilities at one time.

“You can’t call off the best weapon we have, which is social isolation, even out of economic desperation, unless you’re willing to be responsible for a mountain of deaths,” Arthur Caplan, professor of bioethics at NYU, told the New York Times. “Thirty days makes more sense than 15 days. Can’t we try to put people’s live first for at least a month?”

As of Tuesday morning, there have been 46,168 confirmed cases in the United States, with more than half (23,230) in New York according to https://www.worldometers.info/coronavirus/. Even in New York, which has almost 10 times the confirmed cases as New Jersey’s 2,844, the rate of known infected individuals is just now crossing one per 1,000 residents.

As officials scramble to adjust on the fly to this pandemic, and scientists scramble to develop methods for fast and reliable testing that can be deployed on a far wider scale, the debate over how long harsh restrictions on what people can do can last is likely to dominate the conversation in coming days.

It is unclear, obviously, when live events and the ability for crowds to gather in large scale will return, regardless of how quickly the harshest stretch of restrictions on Americans lasts. But it sounds like if the President and his advisors get their way, Americans will be returning back to some kind of normal far sooner than the most dire of predictions from the past two weeks would have indicated.