Rock band Great White issued an apology after outcry that followed a concert in Dickinson, North Dakota in front of a crowd that failed to wear masks or follow social distancing protocols on Thursday. The band indicated that plans were to have the crowd follow government guidelines, but once in the venue, those were more or less ignored.

“We understand that there are some people who are upset that we performed this show, during this trying time,” reads the statement released to media. “We assure you that we worked with the Promoter. North Dakota’s government recommends masks be worn, however, we are not in a position to enforce the law.”

“We have had the luxury of hindsight and we would like to apologize to those who disagreed with our decision to fulfill our contractual agreement. The Promoter and staff were nothing but professional and assured us of the safety precautions…our intent was simply to perform our gig, outside, in a welcoming, small town.” 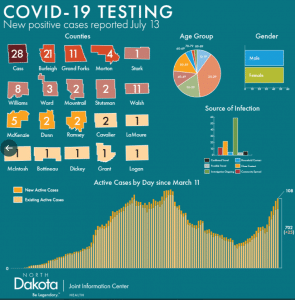 Per North Dakota’s health department, the state has 4,442 positive coronavirus test results, an increase of 108 as of Monday. Similarly to many states across the country, it has seen an increasing trend line in daily positive tests.

Event coordinator April Getz told local media in June that the city’s plan for the performance included no requirements for masks or social distancing, despite CDC recommendations.

“We do not have restrictions, believe it or not, we don’t have any. I guess it’s one of the first events this year that didn’t get canceled and was approved by the city; we’re all very, very excited about it… It’s one of those things where if people feel comfortable coming down and mixing and mingling, that’s their personal choice. We’re leaving it up to everybody that chooses to attend.”

Great White joined other artists in facing backlash over performing before crowds that avoided the recommended distancing guidelines as the coronavirus pandemic roils the country. Chase Rice issued a similar apology following a performance in June. They are scheduled for another outdoor concert in August.