Lolla20201
With no Lollapalooza this summer due to the coronavirus pandemic, a virtual Lolla2020 is set to air from Thursday, July 30 to Sunday, August...

With no Lollapalooza this summer due to the coronavirus pandemic, a virtual Lolla2020 is set to air from Thursday, July 30 to Sunday, August 2 on YouTube and at Lolla.com, Live Nation announced this week. More than 150 performances and appearances are planned for the virtual event, including live performances by Alison Wonderland, Carnage, H.E.R., Kali Uchis, NGHTMRE and more.

“The 4-night event will include more than 150 performances and appearances, featuring fan-favorite sets from previous festivals, including international editions, original performances from artists all over the world, classic archival sets from some of the festival’s most popular headliners and a series of special late-night performances,” the announcement reads. “In between the music, Lolla2020will highlight causes important to the festival’s history, community and home of Chicago.”

With charitable giving and social causes long a part of the Lollapalooza festival DNA, Lolla2020 is no different. The festival is partnered with Michelle Obama’s When WE All Vote organization, as well as the Equal Justice Initiative and the Arts for Illinois Relief Fund.

Performances will begin broadcasting every evening at 5 p.m. central time, with streams available at Lolla.com andYouTube.com/Lollapalooza. 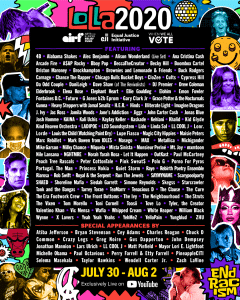 The full release from Live Nation is included below:

Lollapalooza will commemorate this year’s festival weekend with Lolla2020, a free four-night broadcast event taking place on the original dates of the Chicago-based festival, Thursday, July 30 through Sunday, August 2. The broadcast will air exclusively live on YouTube beginning at 5pm CT each night, with the full schedule to be revealed on Wednesday, July 29. Lolla2020 is proud to partner with and raise awareness for the Arts for Illinois Relief Fund, the Equal Justice Initiative, and When We All Vote. Tune in at Lolla.com andYouTube.com/Lollapalooza.

The 4-night event will include more than 150 performances and appearances, featuring fan-favorite sets from previous festivals, including international editions, original performances from artists all over the world, classic archival sets from some of the festival’s most popular headliners and a series of special late-night performances. In between the music, Lolla2020will highlight causes important to the festival’s history, community and home of Chicago.

Fans will be virtually transported to the festival grounds to experience epic past Lollapalooza performances from LCD Soundsystem, Metallica, Yeah Yeah Yeahs, Ellie Goulding, Run The Jewels, Lorde, Alabama Shakes, Tove Lo, including historic headlining sets from Paul McCartney, Chance The Rapper, OutKast, and Arcade Fire, celebrating the ten year anniversary of their Grammy Award-winning Album Of The Year, The Suburbs, and much more.

Since its inception almost thirty years ago, Lollapalooza has strived to inspire, connect and uplift our communities. Lolla2020 is pleased to bring awareness to and partner with Michelle Obama’s When We All Vote, a non-profit, nonpartisan organization launched by Co-Chair Michelle Obama in 2018 to increase participation in every election, with a mission to change the culture around voting and close the race and age voting gap to ensure every eligible voter is registered and ready to vote, the Equal Justice Initiative, which is committed to ending mass incarceration and excessive punishment in the U.S., challenging racial and economic injustice, and protecting basic human rights for the most vulnerable, and the Arts for Illinois Relief Fund, which provides financial relief to venues, organizations and workers in the creative industries, including artists, artisans, stage and production members who have been impacted by COVID-19. Fans can look forward to special appearances by Michelle Obama and Bryan Stevenson, easily register to vote via www.whenweallvote.org/lolla, learn more about each of the organizations, and donate to support their efforts during the broadcast at www.lollapalooza.com/donate.

The Lolla2020 lineup will include four performances by local artists presented in collaboration with theCity of Chicago Department of Cultural Affairs and Special Events (DCASE). These four sets feature many of Chicago’s incredible emerging and established artists including Jamila Woods, KAINA, Heavy Steppers with Jamal Smallz, Peter CottonTale, Rebirth Poetry Ensemble, Emon Fowler, Linda Sol, and The Era Footwork Crew — programmed by DCASE and recorded at neighborhood music venues to showcase Chicago’s diverse and legendary music scene during the Year of Chicago Music, now extended into 2021.

Salesforce is proud to support Lolla2020 with their Make Change initiative and will feature four sessions hosted by hip-hop icon and Rock The Bells founder LL COOL J, including “The Art of Breaking,” “The Art of MCing,” “The Art of Graffiti & Photography,” and “The Art of DJing.” Make Change highlights leaders who use their talent as a platform for change. This series inspires others to take part in the conversation, shift their perspective and understand how their approach can make change in the world.

PayPal is showing their support for local restaurants, photographers and artists impacted by the festival’s cancellation with the PayPal Loves Chicago hub. Fans will have the opportunity to show their support of these small businesses by purchasing artwork, ordering food or making a donation easily and securely by checking out with PayPal. In addition, as the preferred donation partner of Lolla2020, when fans donate to When We All Vote, the Equal Justice Initiative, and the Arts for Illinois Relief Fund using PayPal between July 27 and August 2, Lollapalooza will match up to $10,000 per organization.

For eight years, the Toyota Music Den at Lolla has showcased emerging artists and music discovery, and Toyota is proud to continue doing so virtually at Lolla2020. Performances will feature artists DaniLeigh, mxmtoon, Masego and Princess Nokia. Toyota is also taking part in the first-ever Mayor of Lolla sweepstakes. Fans will have the opportunity to win a variety of prizes, including the grand prize package – two, 4-day Platinum Tickets to Lollapalooza 2021, flights, hotel suite and a new 2021 Corolla Apex. For official details and contest rules, visit: https://mayor.lollapalooza.com/.

Red Bull is bringing Selema Masekela’s “What Shapes Us” podcast to the Lolla2020 broadcast. He’ll be joined by special guests each night, including Perry Farrell, PineappleCITI and Atiba Jefferson, as they explore the incidents and accidents that shape us into being.

Limited-edition Lollapalooza merch is available now through Monday, August 3 and includes a brand-new selection of graphic tees, fan-favorite throwback designs, hats, a puzzle, a robe, a mask and more. A portion of proceeds from the Lolla Cares Collection will benefit When We All Vote, Equal Justice Initiative, and Arts for Illinois Relief Fund organizations. We’ve also teamed up with Bud Light for a special Lolla2020+Bud Light collection that will be available for sale throughout the weekend. Fans who check out using PayPal will receive a free commemorative bandana designed by Chicago artist John Dempsey. To view the full-collection and to purchase, visit store.lollapalooza.com.