Las Vegas’ Allegiant Stadium will see its first concert performance on July 3, as ILLENIUM takes the stage for a three-set TRILOGY performance, announced over the weekend. Tickets go on sale this week for the performance, which begins at 8PM and is open to all ages.

“ILLENIUM, whose inventive music and collaborations have made him one of the most successful crossover electronic artists today, will perform Triology, a three-set concert commemorating his previous three albums – Ashes, Awake, Ascend,” reads the Allegiant Stadium website announcing the performance. “This show will bring closure to this trio of albums as ILLENIUM begins a new musical journey with the July 16 release of his highly anticipated fourth album, Fallen Embers.”

Presales are up throughout the week, with an artist presale already going on and a venue presale beginning Tuesday. Tickets that remain following the held back presale alottments will go on sale Friday.

The late May announcement of the early July show means that there is a quick turnaround for the event, which will be the first concert in the new stadium, taking place a week prior to Garth Brooks long ago sold-out performance. Brooks had initially been booked to play Allegiant Stadium in the fall of 2020, only to see the event bumped to February of 2021, and then once again to July.

Now, the EDM event will serve as the inaugural full-scale event for the facility, which had something of a soft open since it was completed last year, due to ongoing restrictions on live event attendance due to the COVID-19 pandemic.

“TRILOGY – my biggest show ever – will take place Saturday, July 3rd at the brand new Allegiant Stadium in Las Vegas (home of the raiders)!,” the performer shared on social media. “Performing three sets all in a single night – one for each of my three albums. I’m beyond excited to present Ashes, Awake, and Ascend as a new experience! Can’t wait to see you all there.” 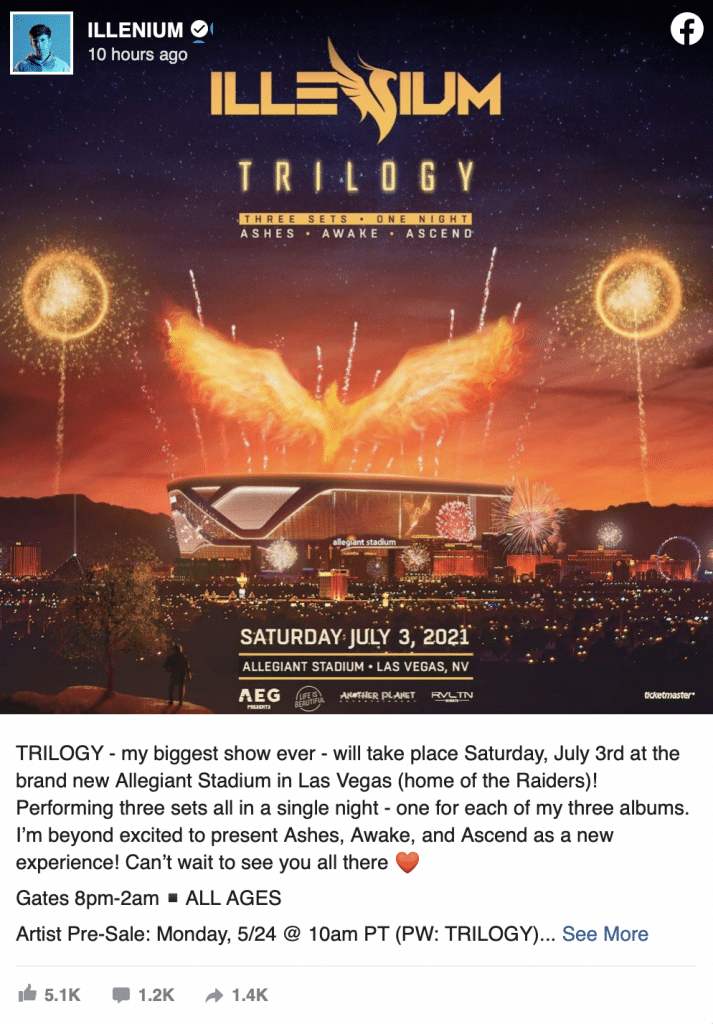