Madison Square Garden will be rocking in less than two weeks, at least for those who have been vaccinated against COVID-19. The Foo Fighters announced plans to reopen the venue to its first full capacity crowd since March 2020, performing at the midtown New York venue June 20.

Tickets go on sale this week, but will be open only to consumers who can show proof of full vaccination against COVID-19. That means anyone who purchases a ticket will need to have either a record of two doses of the approved Moderna or Pfizer vaccines, with the second coming at least two weeks prior to the concert date, or a single-shot Johnson & Johnson vaccine. The lone exception is fans 16 and younger, who can provide proof of a negative antigen or PCR test for COVID-19, accompanied by a vaccinated adult.

“We’ve been waiting for this day for over a year,” says Foo Fighters frontman Dave Grohl. “And Madison Square Garden is going to feel that HARD.”

It has been more than 460 days since Madison Square Garden has seen a concert performed on its stages, or a full capacity crowd. The New York Knicks had planned to open their ticketing to full capacity if the team made the second round of the playoffs, but they were eliminated by the Atlanta Hawks. Since March of last year, what events were held at MSG have been limited by public health officials to a fraction of full capacity, with recent expansion to allow for non-socially distanced seating areas for fans who could provide proof of full vaccination.

With just 12 days between the announcement and the show, the timeline to fill the seats is very limited. Foo Fighters Madison Square Garden tickets go on sale this week, with presales starting almost immediately, and general public sales set for June 11. 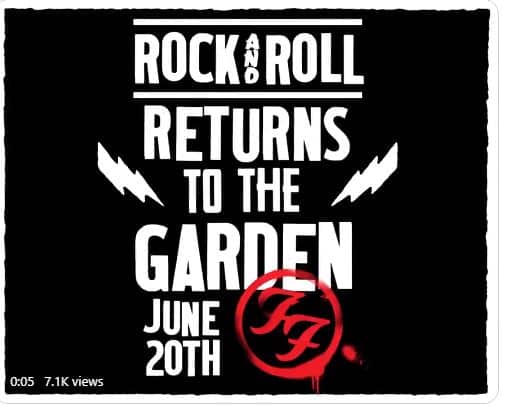 New York has seen a number of high profile events announced in the past few days, as it accellerates its reopening plans. Bruce Springsteen will return to his best-selling solo residency “Springsteen on Broadway” beginning later this month, while the city recently announced plans for a massive reopening concert in August, currently in planning stages with music legend Clive Davis curating the lineup, which is yet to be announced.

June 20th will also mark the Foo Fighters’ return to touring, having been on the shelf due to the pandemic as well. Previously, several festival and concert dates had been announced by the band, but Madison Square Garden is more than a month earlier than their previously scheduled first show, on July 28th at Icon Festival in Cincinnati.

Announced as of June 8