Vivid Seats Speculative Tickets for Springsteen Taken Down After Scrutiny

Faced with media push-back over speculative ticket listings for upcoming Springsteen on Broadway performances, Vivid Seats took the listings down, and claimed they were mistakenly in place, according to NJ.com. The denial came despite Vivid Seats speculative tickets being marked as “zone seats” – a common reference to tickets that are offered for sale through the ticket marketplace that are not yet in the sellers possession.

“Those shouldn’t be up,” was the response from Vivid Seats spokesperson Michal O’Neil when asked about zone listings for Springsteen on Broadway available for sale prior to Thursday’s primary sale for the upcoming show. NJ Advance Media had located numerous listings for tickets on Vivid Seats, listed for as high as $8,642 for a Saturday orchestra performance. “Sometimes we do a practice. It was a test that we do before big shows.”

The “testing” excuse seems fishy, given the fact that Vivid Seats regularly allows certain sellers to list speculative tickets for sale on its marketplace, which serves both its primary website and an immense network of white label affiliates, including Ryadd-owned properties such as Ticketsonsale.com, which was also referenced as having speculative tickets for Springsteen available by the publication. In a search of various ticketing websites prior to Thursday’s primary market sale, Vivid Seats had listings available for the entire run of Springsteen shows this summer at the St. James Theater – with every ticket marked as a “zone” listing.

No longer available, they all bore the same disclaimer available on all such listings on Vivid Seats and its white label clients:

“Zone Seating this listing describes tickets that the seller does not own but is offering to procure for you. Like all tickets sold on a marketplace, zone tickets may be higher or lower than the price first offered by the venue. After you place your order and the order is confirmed, we guarantee that your tickets will be within the zone or section listed or one comparable and that you will receive these tickets in time for your event or your money back.”

Locating Vivid Seats speculative tickets is easy enough if you just search for the term “zone seating” – such as the ones below, which are a listing for Section 213 – Row 1-24 for an August 2022 Rage Against The Machine performance at Madison Square Garden. 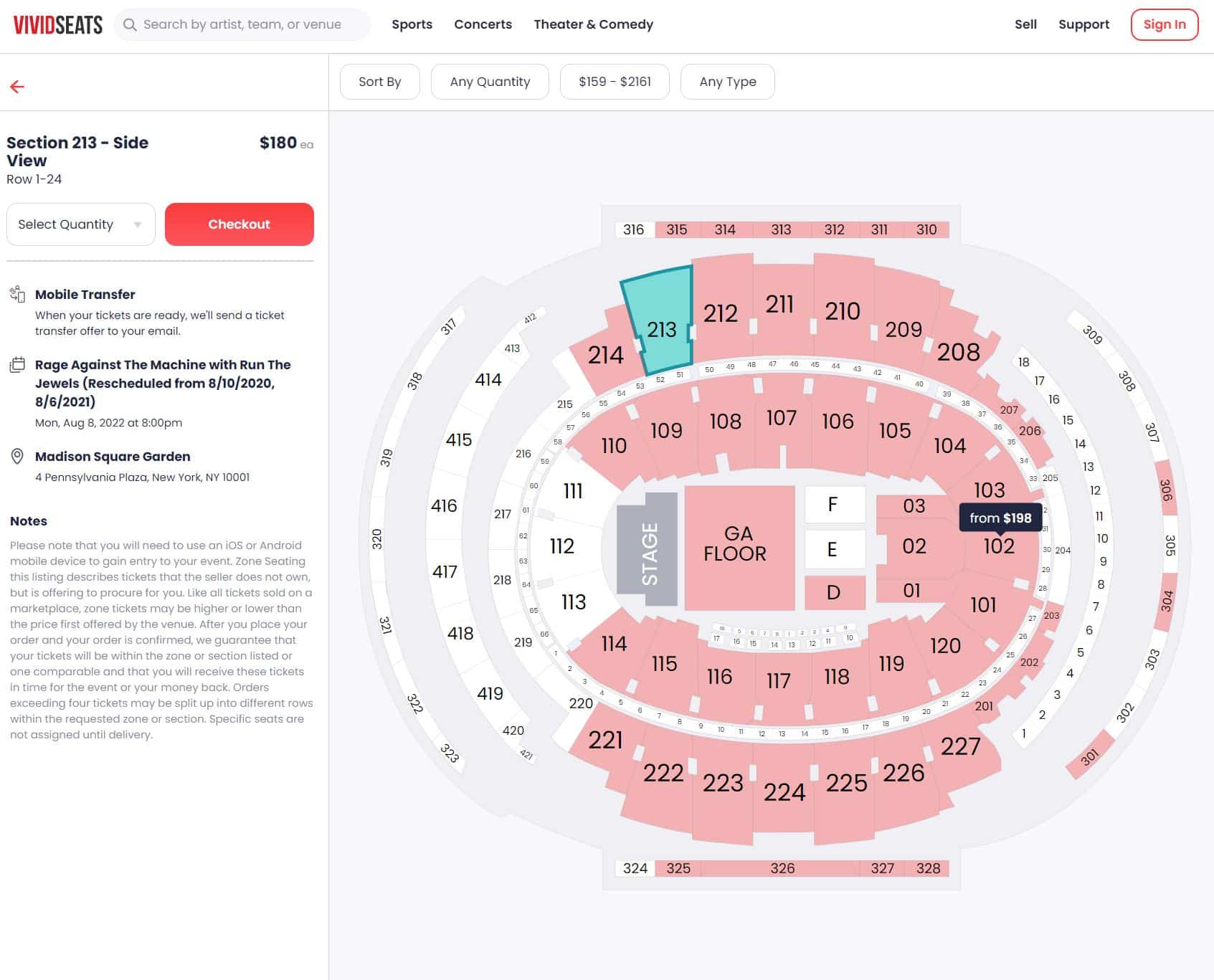 It is important to note – listings for Vivid Seats speculative tickets do not break the law, provided they carry the appropriate disclosure. New York has taken legal action in the past to ensure that consumers are aware of the nature of these tickets, which are common on both secondary and primary ticketing marketplaces for events in many states. The process is treated by some ticket resale operators similar to taking a “short” position on a stock – promising to sell a ticket at a certain price, betting that you can acquire the tickets for less than the price your customer has decided they are willing to pay.

The question is why Vivid Seats chose to pull the listings down once contacted by the media. Perhaps the marketplace is looking to avoid perceived negative coverage as it winds through the process of going public through the Horizon Acquisition Corp merger announced in April.

Regardless, the tickets have since gone on sale, and Springsteen on Broadway is as hot as most expected it would be, with tickets already effectively sold out for the full run of performances within hours, after its initial run set all-time records for ticket prices. Springsteen on Broadway tickets available on TicketClub.com, for example, range from $582 per seat for a pair of tickets in the balcony all the way to $3,476 per seat for a pair of seats in the center orchestra for the Friday, July 9 performance.

An email seeking clarification on Vivid Seats decision to take down the listings has not yet received a response as of Thursday afternoon.