NIN1 Nine Inch Nails32
Nine Inch Nails announced that it would be cancelling its remaining appearance in 2021, due to concerns about the continued spread of COVID. The...

Nine Inch Nails announced that it would be cancelling its remaining appearance in 2021, due to concerns about the continued spread of COVID. The industrial band fronted by Trent Reznor made its announcement on August 19 via its website and social media.

“It is with great regret that we are cancelling all NIN appearances for the remainder of the year,” the statement reads. “When originally planned, these shows were intended to be a cathartic and celebratory return to live music. However, with each passing day its becoming more apparent we’re not at that place yet.

“We are sorry for any inconvenience or disappointment and look forward to seeing you again when the time is right.”

Ticket buyers for the September 21 and 23 shows in Cleveland, please refer to your point of purchase for ticket refund information. pic.twitter.com/XYboGA7FBw

NIN had a pair of Cleveland shows scheduled alongside the Pixies, and had also been tabbed as one of the headliners at several festivals put on by Danny Wimmer Presents. Slipknot and Morrissey were added to the Riot Fest lineup in Chicago after the band’s departure, with Disturbed replacing them on the bill at Louder Than Life.

Naturally, the reaction to the decision to halt touring was mixed. Some lauded the caution taken amid uncertain circumstances, while others questioned whether or not refunds would be allowed for festival purchases, given that at least some may have purchased specifically to see Reznor and Co. perform. 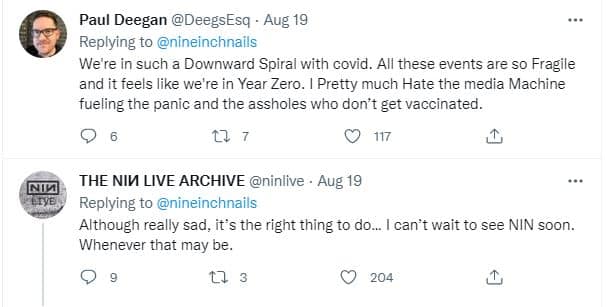 One particularly clever fan laced his message with a number of references to NIN songs and albums while expressing their frustration. “We’re in such a Downward Spiral with covid,” @DeegsEsq posted. “All these events are so Fragile and it feels like we’re in Year Zero. I Pretty much Hate the media Machine fueling the panic and the assholes who don’t get vaccinated.”

With the cancellations, the lone event on the NIN touring calendar is Hellfest, which takes place in June 2022 in France.