Digital ticketing6 Ohio State5
Fans were back at the famed Horseshoe on Saturday for a marquee tilt between the host Ohio State Buckeyes and visiting Oregon Ducks, but...

Fans were back at the famed Horseshoe on Saturday for a marquee tilt between the host Ohio State Buckeyes and visiting Oregon Ducks, but many didn’t even make it in by the time the game started – casualities of a chaotic rollout on the first day of the new digital-only ticketing system for the new season.

Kinks in the rollout of mobile-only ticketing systems has plagued stadiums around the world as they’ve reopened post-COVID, and Ohio State officials have the headaches to go with being the latest high profile chapter. School officials vowed to work this week to fix the issues, with a home game against Tulsa looming Saturday.

“We will begin a series of meetings to discuss what we have learned from this weekend and how we will make improvements for the upcoming games,” wrote associate athletics director Jerry Emig in an email discussing the game-day experience that saw thousands of fans stuck in huge lines, packed in tight quarters with many not wearing masks – AKA the exact opposite of what any cogent COVID-safety plan would advise.

Delays were blamed on “a number of reasons” including technical issues with wifi and “learning curves with new technologies and new systems.” 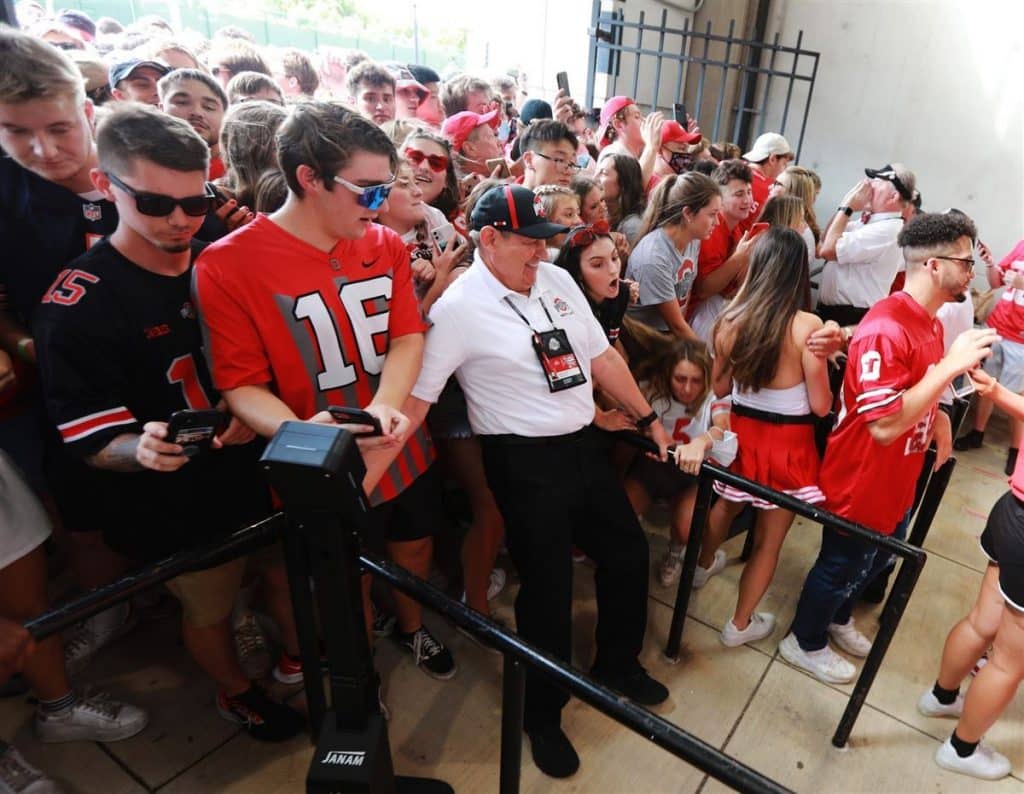 “Students were chanting, ‘Let us in,’ and people were shoved together shoulder to shoulder for over and hour with no masks on,” said student Jordan Hall, who told the Columbus Dispatch he had been in line nearly 30 minutes prior to kickoff but didn’t make it inside the stadium until after the second quarter had started. “Once we finally got in, it was literally part of a segment of time when the front gate appeared to give up and let in hundreds or thousands of people at a time without even scanning tickets.”

The snafu at the entrance was so bad that athletics officials had already issued a statement apologizing before the game (a Buckeyes loss) was done.

The Ohio State Department of Athletics thanks the 100,482 fans who attended the season opener today against Oregon. Today was a landmark day, with digital tickets and mobile parking passes. We want to apologize to those who experienced delays entering the stadium that were caused by a number of reasons, including a technical issue with wifi and learning curves with new technologies and new systems. We did reach a point where we allowed fans in line to bypass the scanner and show their tickets to gain entry.

We will learn from today, make improvements and we anticipate next week will be better.

After slowly working towards forcing fans to mobile-only ticketing systems over the past several years, many organizations have gone all-in on the systems as they have reopened post-COVID restrictions, implying that the “touchless” nature of a digital-only system made for a better COVID-safety entry plan. In a small number of places, fan complaints over the forced switch were listened to, such as in Nebraska – which relented and allowed paper tickets after serious pushback. But for most, those complaints fell on deaf ears.

Issues have been widespread, caused by a mix of technical issues and unfamiliarity with the technology on the part of fans, who have been accustomed to having the option of paper tickets for as long as teams have taken the field. It is at least plausible that familiarity will improve over the course of the season, but consumer patience on digital-only ticketing systems appears to already be wearing thin.

“It was a disappointment to be sure,” said Colton Henson after the game. “I think the biggest thing is that it’s a game-day experience and when you pay — tickets have never been more expensive — and there’s an expectation, and regardless of what happens on the field, you’ve got to get people in and out of your facilities.”