Coldplay Music of the Spheres World Tour for 2022 Announced

Coldplay will tour in 2022, going out in support of their new album, Music of the Spheres. The tour begins in March of 2022 and will feature shows in Central America, the United States, Germany, Poland, France, Belgium and the United Kingdom. Expectations are that additional dates will also be announced as the band tours for the first time since 2016-17.

The band also announced plans to tour in a sustainable fashion, aiming for a minimal impact on the climate and environment as part of the central goals for their stadium run.

“Playing live and finding connection with people is ultimately why we exist as a band. We’ve been planning this tour for years, and we’re super excited to play songs from across our whole time together,” the band is quoted as saying in the announcement of the tour on Live Nation’s website.

“At the same time, we’re very conscious that the planet is facing a climate crisis. So we’ve spent the last two years consulting with environmental experts to make this tour as sustainable as possible, and, just as importantly, to harness the tour’s potential to push things forward. We won’t get everything right, but we’re committed to doing everything we can and sharing what we learn. It’s a work in progress and we’re really grateful for the help we’ve had so far.”

“If you’d like to come to a show and sing with us, we’re so excited to see you.”

Coldplay’s tour dates kick off with a performance on March 18 at Estadio Nacional in San Jose, Costa Rica. Other March dates include Santo Domingo, Dominican Republic followed by Monterrey and Guadalajara, Mexico. After an April 3 date in Mexico City, the band moves on the the United States through the rest of April, May, and June. Stadiums in the U.S. include Levi’s Stadium and SoFi Stadium in California, State Farm Stadium in Phoenix, Soldier Field in Chicago, Metlife Stadium in New Jersey, and Raymond James Stadium in Tampa.

Dates in Europe follow through the summer, including three shows at London’s Wembley Stadium. The currently announced dates end with Rock in Rio in September, but the band reportedly has plans for additional dates to be announced.

H.E.R. will serve as the support act for much of the Coldplay tour, including all U.S. dates. Other dates will be supported by London Grammar. 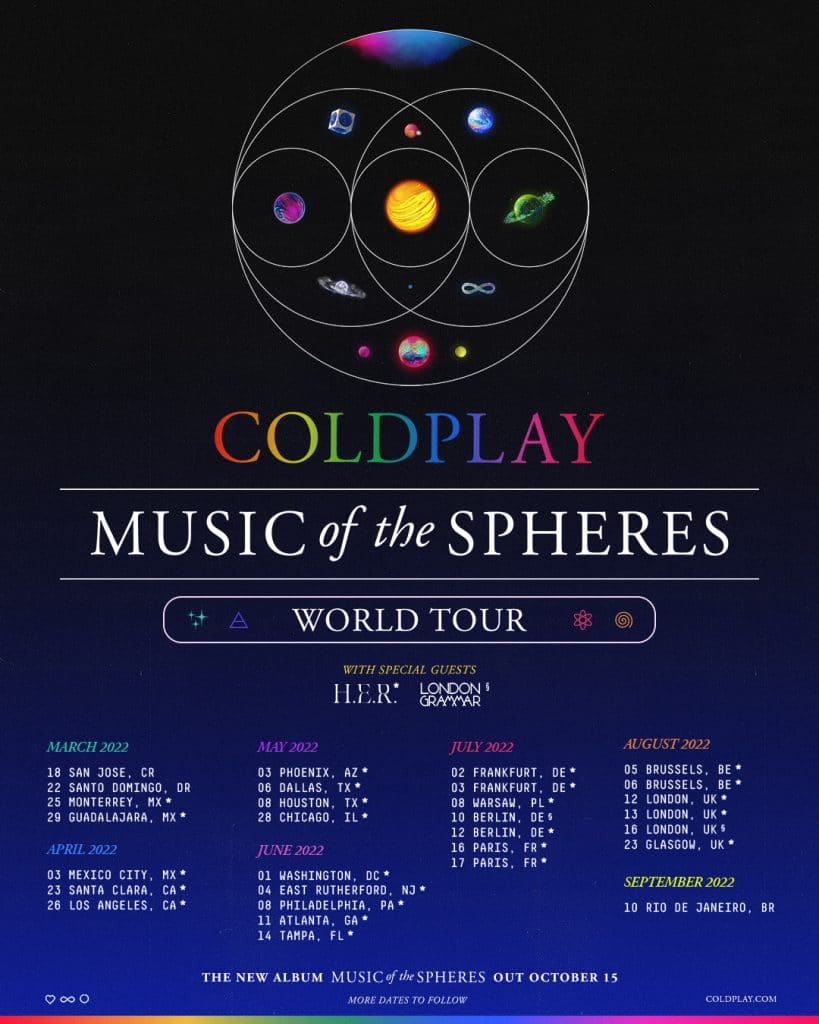