Austin Texas1 George Strait92 Moody Center4 Willie Nelson68
A pair of country legends will headline the grand opening celebration for the new Moody Center at the University of Texas, as George Strait...

A pair of country legends will headline the grand opening celebration for the new Moody Center at the University of Texas, as George Strait and Willie Nelson have signed on for the festivities in Austin. The event is scheduled for April 29, 2022. Strait is the headliner, with Nelson billed as a special guest. Randy Rogers Band is also featured as a guest for the event.

Moody Center is one of several venues opening in the coming months under the Oak View Group banner, and will serve as the home court for University of Texas men’s and women’s basketball games as well as hosting concerts and other events. It will be replacing the Erwin Center at UT following the upcoming winter sports seasons for both teams.

George Strait and Willie Nelson’s grand opening performance won’t actually be the first events staged at the venue, which has the Weeknd, John Mayer, Trever Noah and Justin Bieber on its calendar in April prior to the twin-bill of country stars.

Tickets for the event go on sale October 22 at 10AM. A special venue presale is open prior to that, with other credit card or promoter presales likely.

George Strait is coming off of his first-ever Austin City Limits Festival headlining gig, having ancored the lineup at the festival the first two weekends in October. The “King of Country Music” has performed in Austin throughout his long career, including stops in the city during his 2014 “farewell” tour and performing at the Erwin Center’s 40th anniversary in 2018.

Nelson, who will turn 89 on the day of the show (he was born April 29, 1933), has a long association with Austin, having moved to the city in the early 1970s just as his Outlaw Country fame began to explode. 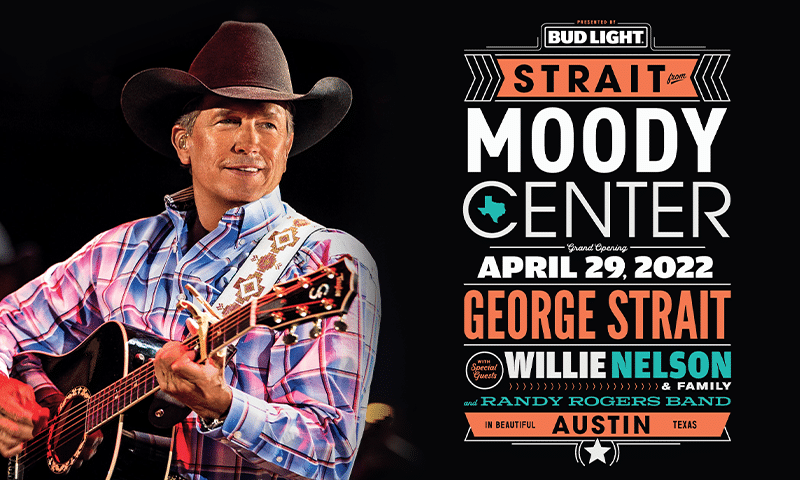