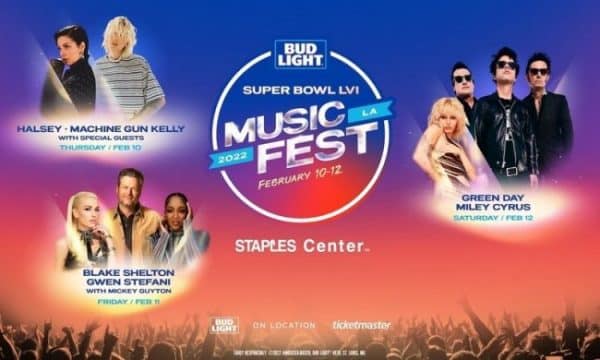 The return of the Bud Light Super Bowl Music Fest will bring a series of headliners to Los Angeles during the lead-up to Super Bowl LVI in February. The three-night affair will bring multiple headlining acts to the Crypto.com Arena (which was until recently known as Staples Center) from Thursday February 10 through Saturday February 12 before the big game on Super Bowl Sunday.

“We’re absolutely thrilled that our Bud Light Super Bowl Music Fest is returning to bring passionate music and football fans’ never seen before performances,” said Lane Joyce, Director of Experiential Marketing for Bud Light. “With this year’s festival taking place in the iconic Staples Center, we’re excited about the line-up of musicians we have brought together across various genres, and can’t wait to bring people in Los Angeles even more fun to what is already set to be a big weekend.”

“Los Angeles is the epicenter of sports and entertainment, and we’re thrilled to host this incredible festival for a celebration of everything the city represents,” said On Location President, Paul Caine. “This unforgettable staple of Super Bowl weekend anchors an exciting slate of On Location experiences.”

No event was held in the lead-up to the 2021 Super Bowl in Florida, which faced significant restrictions on crowd capacity amid the COVID-19 mitigation efforts.

Tickets for the event went on sale on Thursday. Details are available at SuperBowlMusicFest.com.