Chris Rock Tickets3
An incident at Sunday’s Academy Awards ceremony in California has been all over the news and the internet Monday, and it appears that it...

An incident at Sunday’s Academy Awards ceremony in California has been all over the news and the internet Monday, and it appears that it has caused ticket prices for Chris Rock’s upcoming performances to surge to dramatic highs. The comic’s upcoming Ego Death World Tour may be more successful than organizers had previously hoped, as the utterly out-of-leftfield moment appears to have energized demand for Rock’s shows.

For those who have been hiding from the internet for the last 24 hours, Will Smith struck Rock with a slap to the face after the comic made a joke regarding Smith’s wife – Jada Pinkett-Smith – looking ready to perform in a sequel to GI Jane. The joke, centered around Pinkett-Smith’s close-cropped haircut, clearly struck the wrong chord with the couple, and Smith chose violence in response.

Watch: Will Smith slapped Chris Rock onstage at the Oscars after taking offense to a joke he told about Smith’s wife, Jada Pinkett-Smith https://t.co/Or2veMdKpb pic.twitter.com/Ed7XmDDsvU

Things cooled down after – Rock opted against any serious reaction, and reportedly declined to press charges. Smith was later announced as the winner of the award for Best Actor for his portrayal of Richard Williams in the film King Richard, but may face repercussions from the Academy for his actions.

But the buzz has clearly helped Chris Rock tickets in the marketing department. Tickets to his next show – on Wednesday in Boston – are now a minimum get-in price of $445 as of Wednesday afternoon at Ticket Club, a resale marketplace. Those prices are inclusive of fees for Ticket Club members, as the site operates at an all-in system for members. 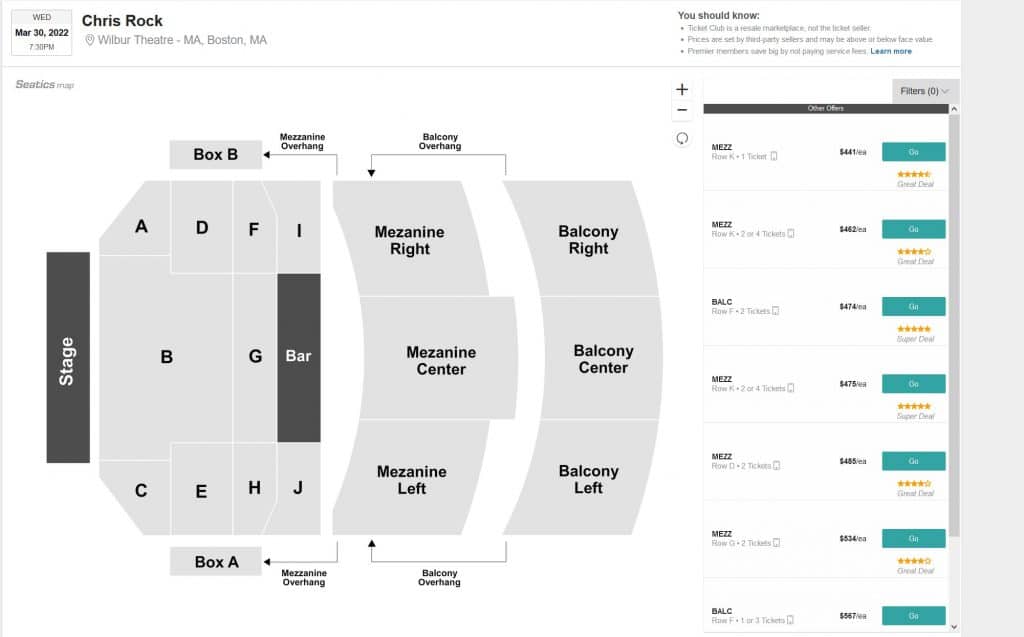 Tickets for the first listed show on his Ego Death World Tour in New Jersey on April 2 are going for a minimum of $226.

It’s too early to tell if the spike will be short-lived, but the short-term impact at least has been significant on the demand for these events, as reflected by the asking price on secondary ticket marketplaces. Chris Rock is also performing several dates alongside Kevin Hart this summer, which are seeing a similar bump on Monday.

Check out the full Chris Rock touring schedule and ticket links below: