Eric Church fans are frustrated this week, having just been informed that the country star has decided to cancel an upcoming San Antonio concert in order to go to a basketball game. Church, who is a North Carolina native, is an avid Tar Heels fan, and has opted to head to New Orleans to watch the NCAA semifinals tilt between them and arch-rival Duke.

“This Saturday, my family and I are going to stand together to cheer on the Tar Heels as the team has made it to the Final Four,” reads an email sent on behalf of Church to those who had purchased tickets to the concert, which was scheduled for Saturday at the AT&T Center. “As a lifelong Carolina basketball fan, I’ve watched Carolina and Duke battle over the years but to have them matchup in the Final Four for the first time in the history of the NCAA tournament is any sports enthusiast’s dream.”

“This is also the most selfish thing I’ve ever asked the Choir to do: to give up your Saturday night plans with us so that I can have this moment with my family and sports community,” he continued. “However it’s that same type of passion felt by the people who fill the seats at our concerts that makes us want to be part of a crowd at a game of this significance. Woody Durham always said, ‘Go where you go and do what you do,’ thanks for letting me go here and be with the Tar Heels.”

County music star and #UNC super fan Eric Church has canceled his show in San Antonio on a Saturday, April 2 so they he can go watch #UNC play #Duke in the Final Four with his family. pic.twitter.com/CSeBwpd9wM

The reaction from fans was predictably unhappy, as many had planned travel around their ticket purchase, or had to make other arrangements – or just didn’t like being cancelled on after paying hundreds of dollars, even if they’ll be refunded. A sampling from the thread below the above tweet: 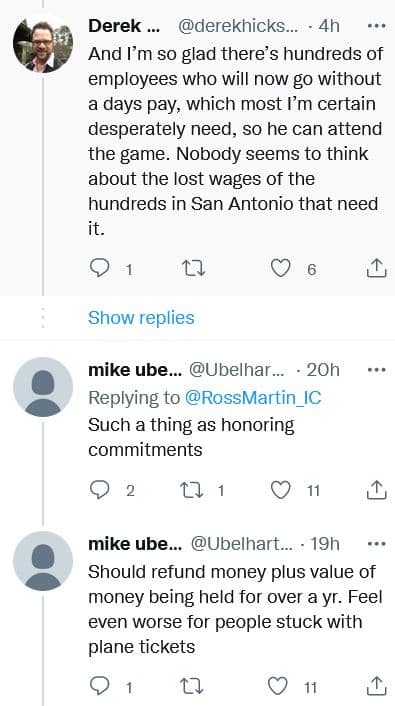 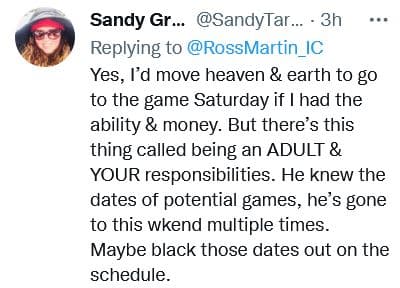 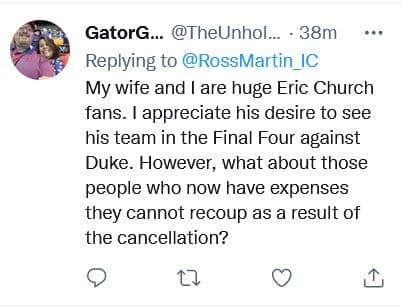 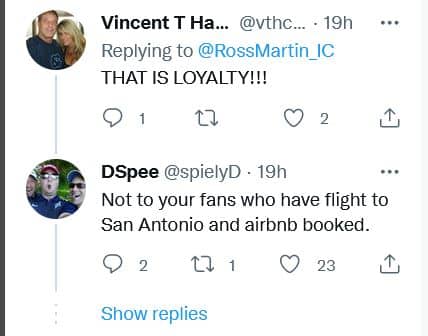 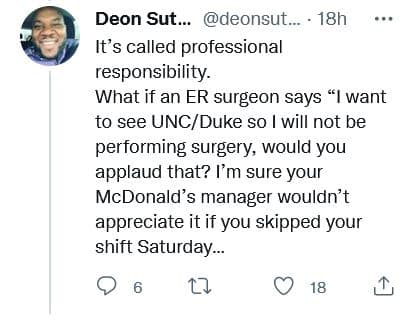 One fan complained about being out thousands over the decision.

A writer on Saving Country Music said consumers are right to be angry at Church over the cancellation, particularly given how much Church has made a career out of proclaiming to be so close to his fans that he’d cancel thousands of tickets to try to defeat resellers.

“Eric Church fans left holding the bag in San Antonio have a right to be angry, and the situation takes a significant step in a perilous direction where privileged entertainers can cancel events on a whim to serve their own purposes as opposed to making hard working fans who’ve paid good money to see their favorite artists perform their priority,” they wrote. “Massive stars like Eric Church are given opportunities average music fans can only dream of. Missing things like basketball games is a minor penance they have to pay to fulfill their performing commitments.”

Church has not commented on the controversy outside of the message announcing the event cancellation.