The 2022 NBA Finals kick off on Thursday night in San Francisco, and fans are paying the highest prices – ever – for tickets to see the games. The matchup between the Boston Celtics and the Golden State Warriors pits one of the league’s iconic franchises against its most dominant team of the last decade, and demand for the bi-coastal showdown is as high as any NBA Finals in recent memory.

According to Ticket Club, the overall average ticket price for those that have been purchased for the series as of Thursday morning is $1,743, which would be a record by several hundred dollars if it holds up. Looking at data going back to 2012, the ticket resale marketplace shows the next-highest average ticket price paid for any NBA Finals to have taken place back in 2019, when the Toronto Raptors defeated Golden State for their first championship. Last year’s finals between the Phoenix Suns and Milwaukee Bucks saw an average sold ticket price of $1,290, with only one other finals – Warriors-Cavs in 2016 – averaging more than $1,000 per ticket for Ticket Club members. 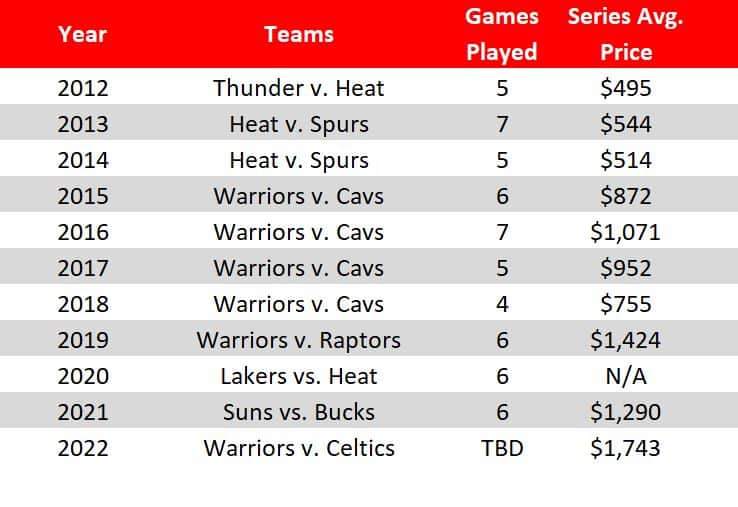 Currently available tickets start with a “get-in” of $679 for tonight’s opener, rising steadily throughout the series with a $1,373 minimum price for someone looking to secure tickets to a potential seventh game as of right now. Median prices range between $1,617 for game three in Boston and $3,338 for game 7, with the average listed prices above $2,000 for each of the first four contests and rising above $3,000 for games 5-7 should they be played.

If anything, the Ticket Club figures are on the low side for what consumers are paying for this series, as their prices reflect what members will pay on their system, which doesn’t charge any service fees. More traditional marketplaces have additional premiums on their pricing for all seven games. The “get-in” prices for the seven game series across several of the largest ticket resale marketplaces bear this out, when viewed including fees.

Boston and Golden State last faced off for the NBA title all the way back in 1964, in the middle of the Celtics’ glory years, which saw the franchise capture 11 championships in a 13 year stretch between 1957-1969. The Red Auerbach coached team downed the then-San Francisco Warriors four games to one. San Francisco was back to the finals again in 1967, but fell once more to the Philadelphia 76ers in the first finals since 1956 that Boston didn’t participate in. It would be 1975 before Golden State captured its first NBA title (though the franchise had won two Basketball Association of America crowns in 1947 and 48 as the Philadelphia Warriors before relocating to California. Boston last won a title in 2008, defeating the Los Angeles Lakers in the finals for the tenth time in that rivalry’s long history. LA got them back with a series win over the Celtics in 2010, Boston’s last trip to the finals.

Since that point, Golden State has been a dominant force in the NBA, winning championships in 2015, 2017, and 2018 while playing in the finals for five straight years out of the Western Conference. They are back to the finals for the first time since 2019, looking for championship No. 7. Boston is going for title No. 18, which would give it the all-time NBA title lead over the Lakers, who pulled even with their 17th crown with their victory in the COVID-impacted 2020 season.

For those who are finding the NBA finals ticket prices to be a little too rich for their taste, all games are scheduled for broadcast on ABC. The full game schedule and links to ticket purchasing options are included below.