Hundreds of fans have reportedly seen their tickets to the upcoming Taylor Hawkins tribute concert in London cancelled, with ticket providers citing “irregularities” in their purchase as the reason why. Needless to say, the reaction has not been calm for those it has happened to.

“I purchased four tickets during the presale, the money left my account and I got a confirmation email. Then, on Wednesday I got an email saying they had been cancelled,” Virginia resident Heidi Silver told The Mirror. She and a group of friends bought tickets to the event in London – scheduled for September 3 with a Los Angeles event taking place later in the month – and spent nearly £10,000 for non-refundable flights and £5,000 for accommodation in addition to the ticket costs, only to be notified they were cancelled.

“Obviously I panicked and started following all the right protocols to find a resolution, but there is no customer service number for Ticketmaster. The TicketmasterCS Twitter account even asked me to stop tweeting them.”

Hundreds of fans were reportedly in a similar circumstance, with the show rapidly approaching.

“We have had to cancel your tickets due to booking irregularities,” reads the email that was sent out to impacted consumers (screenshot below). “We’ve already issued a refund for your tickets, so you don’t need to do a thing – you’ll see a credit onto the card you used within 5 working days.” 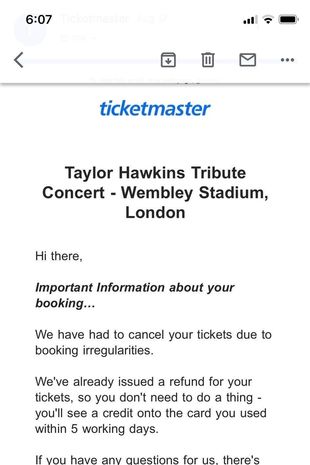 In response to media inquiries regarding the mass cancellations of otherwise legitimate tickets, Ticketmaster told The Mirror that the culling of tickets was in an effort to stop “scalping”

“In a bid to stop touts, the event organiser implemented a safeguard that cancelled any tickets where ticket limits had been exceeded or suspect purchase behaviour was identified,” an email from a Ticketmaster spokesperson said. “Any genuine fan who had a ticket cancelled can re-book the exact same ticket at the exact same price, and all impacted customers have been notified in how to do so.”

Hawkins died suddenly at age 50 in March, found unresponsive prior to a Foo Fighters concert at a festival in Colombia. No cause of death has been announced. In the wake of the tragedy, there was an outpouring of emotional tributes to Hawkins, who had performed with the band for more than 20 years. The September performances will be the first since Hawkins’ death for the Foo Fighters, who called off existing touring and festival plans shortly after his death.

It was clear that the event organizers would take a harsh stance against ticket resale from the moment the events were announced, with the tickets being issued in mobile-only format and restricted from resale (by having transfer rights taken away from consumers who purchased them). Such restrictions are already against the law in several U.S. states including New York and Connecticut, but apparently that wasn’t enough to satisfy the organizers, who still felt that mass cancellations were appropriate.

“This is a one-off gig that meant the world to me to pay my respects,” said Christopher Newman, 33, from Solihull UK, another of the estimated hundreds who received cancellation notices. “I am sure the band themselves will be upset knowing that their one time to pay respects to their fallen brother has turned to chaos just weeks before.”

It is unclear as of Friday afternoon (August 26) how those impacted will be able to go about appealing the decision that cancelled their tickets.