Taylor Swift, whose Eras Tour ticketing presale has dominated headlines for a week, apologized to her fans in an Instagram story while simultaneously blasting Ticketmaster for the botched sale. Swift’s fans complained massively over system errors and other troubles with the tour ticket sales last week, which has landed Ticketmaster and its parent Live Nation in hot water with her fans and lawmakers alike.

“It goes without saying that I’m extremely protective of my fans,” the statement begins. “It’s really difficult for me to trust an outside entity with these relationships and loyalties, and excruciating for me to just watch mistakes happen with no recourse.”

Swift’s statement did not directly name Ticketmaster, nor SeatGeek (which handled some of the 52-date tour for venues it is the primary ticketing agent for) – though Ticketmaster’s Verified Fan system was in place for every venue, whether or not it was the ticketing agent.

“I’m not going to make excuses for anyone because we asked them, multiple times, if they could handle this kind of demand and we were assured they could,” the statement continued. “It’s truly amazing that 2.4 million people got tickets, but it really pisses me off that a lot of them feel like they went through several bear attacks to get them.” 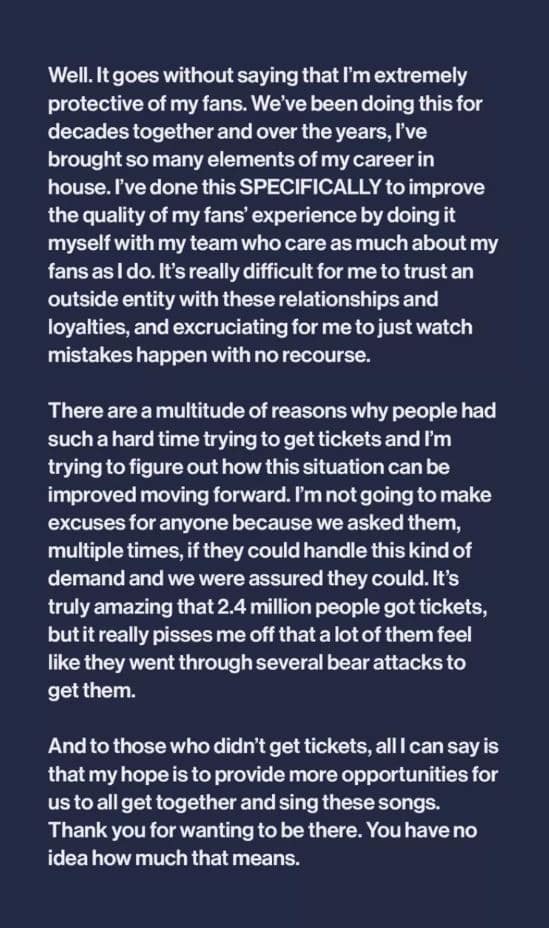 Both Ticketmaster Live Nation have been in damage control mode in the wake of the failures last week, with the ticketing company issuing public a public apology as negative media coverage and legal scrutiny have mounted.

“We strive to make ticket buying as easy as possible for fans,” opens Ticketmaster’s explainer/apology regarding the Eras Tour ticketing meltdown. “That hasn’t been the case for many people trying to buy tickets for Taylor Swift | The Eras Tour. First, we want to apologize to Taylor and all of her fans – especially those who had a terrible experience trying to purchase tickets.”

It goes on to justify the system issues by citing the huge demand spike that forced it to slow down or pause sales, which impacted some fans’ ability to stick around in queues as they had taken time during their work days to try to score passes to the stadium shows. It claims that 2.4 million tickets have been sold already across all 52 dates – 47 of which were ticketed by it, and the remaining by Seat Geek. The failures, it argues, were caused by such overwhelming and unexpected demand.

Live Nation has not directly addressed the controversy, but has issued a statement in defense of its overall operation in response to lawmakers condemnation of its allegedly monopolistic operations, which they say were integral to the issues that Swift fans faced, due to the company and its ticketing subsidiary having a chokehold on the live entertainment business.

It seems unlikely that Swift’s fans will quickly forgive the ticketing and entertainment giants for the issues faced last week, but many are now having to decide whether or not it’s best to grab tickets through secondary ticketing marketplaces for The Eras Tour, or if they should hold out to see if prices drop as show dates approach.

For those interested in browsing, links to multiple ticket resale marketplaces are included below, as are the currently scheduled Eras Tour dates. Ticketmaster has not yet turned on its resale options for this tour.