Opened in July 2001, the facility was built for $420 million and is owned by the Center Operating Company, L.P.

The Center’s first events were a concert by The Eagles and a performance of Michael Flatley’s Feet of Flames tour. Other major concerts held at the facility have been Daughtry, Billy Joel, George Michael, Tom Petty and the Heartbreakers and Rod Stewart. 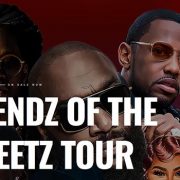 Hip Hop Heavyweights are headed to the Lone Star State this weekend, as the Legendz of the Streetz tour is set to go off at the Toyota Center in Houston on Saturday, October 9 and the American Airlines Center in Dallas on Sunday, October 10. Rick Ross, Jeezy, Gucci Mane, 2... END_OF_DOCUMENT_TOKEN_TO_BE_REPLACED