Plain White T’s was founded in 1997 by Tom Higgenson and Ken Fletcher. The group performed mostly in clubs and bars in the Chicago area, and it took them ten years and several personnel changes to reach a mainstream audience. In 2006, the single “Hey There, Delilah,” originally featured on “All That We Needed,” was re-released on their third album “Every Second Counts” and topped charts all over the world, including the Billboard Hot 100 in the U.S.

Since their sudden and very rapid ascent to stardom, Plain White T’s have been nominated for a Grammy award (Best Pop Performance for a Group in 2008) and released another studio album, 2008’s “Big Bad World.” They have also been prominently featured on the television show “Greek,” providing the theme song for the show and performing in several different episodes. Their most recent tour was in the summer of 2009, encompassing dozens of cities across the United States. 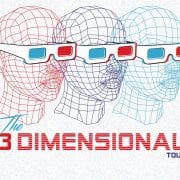 The alt-rockers of New Politics, Plain White T’s, and The Mowgli’s are heading out on a triple-headlining tour this fall. The 3 Dimensional Tour will kick-off on November 12 in Chicago, Illinois, followed by shows in cities like Los Angeles, Pomona, New York City, Louisville, and Phoenix. Along the... END_OF_DOCUMENT_TOKEN_TO_BE_REPLACED