By Stacey Willets TicketNews.com With the ease and convenience of the Internet at nearly everyone’s fingertips, ticket buying is increasingly becoming an online experience.... 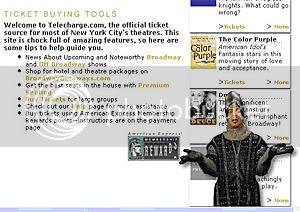 With the ease and convenience of the Internet at nearly everyone’s fingertips, ticket buying is increasingly becoming an online experience. Google “Wicked”, and pages of ticket selling websites will turn up. With so many options to choose from, how does a site make itself stand out?

Telecharge.com, the official ticket source for many top Broadway productions, has enlisted the help of Rovion Inc., “the leader in creating technologies that humanize the delivery of content to its online audiences,” to create a successful ad campaign aimed to capture the attention, and sales, of theater-goers.

With Rovion’s InPerson platform, consumers browsing the site are greeted by Broadway actors who, when rolled over with the mouse, perform as their vibrant characters to personally invite the web surfers to click on them and purchase tickets. When visitors click on the characters they are taken to a page where they can place their orders online. In an age where many people opt to skip the phone call or the box office window, the campaign lends an entertaining and interactive experience to a largely impersonal transaction. . .

The personal connections the actors make with their online audiences help to promote click-through – according to BroadwayWorld.com, last year’s campaign resulted in a 7.49% click-through rate – and entice consumers to see the show. Not only are ticket-buyers tempted to poke the French Taunter to see if he’ll utter his famous “Your mother was a hamster and your father smelt of elderberries!” but they also get a small taste of the production that may whet the appetite enough for a sale.

Telecharge.com’s ad campaign is just one of several initiatives by ticket sellers to enhance their online presence. Last week TicketNews.com reported on Live Nation’s release of widget software that can be downloaded to personal websites and social networking pages and enables users to search LiveNation.com for tickets directly from those sites. Both efforts give these primary sellers an edge over the competition, a growing concern as the secondary market strengthens. The online marketplace is the principal place of business for resellers.

To view a demo of the InPerson ad campaign, click here.